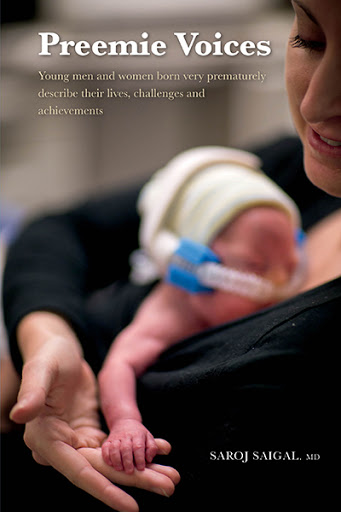 The birth of a very premature baby is a shock for parents. The immediate anxiety about whether their infant will survive quickly leads to concerns about their child’s future quality of life. In this inspiring and informative book, young people who were born weighing less than two pounds, three ounces provide candid and personal stories about their lives, challenges and accomplishments. Now in their thirties, these men and women were cared for at McMaster University Hospital in Hamilton, Ontario, soon after the introduction of newborn intensive care. Dr. Saroj Saigal, a renowned and award-winning neonatologist at McMaster, adds several chapters that outline the history of neonatology, describes recent medical and technological innovations, and explains how many extremely premature babies go on to enjoy fulfilling lives. Her chapters give the answer of a caring specialist to the inevitable question, “What next?” Written for a lay audience, Preemie Voices will move you to tears of admiration and amazement at the remarkable resilience of these tiny survivors. This unique collection of stories will not only provide encouragement and hope for parents who have given birth to a tiny preemie, but will inspire others who will be in awe at the achievements of these infants – both with and without disabilities – who were born too early.

Watch the video documentary of a few participants from Preemie Voices at www.saigalpreemievoices.com

“This book provides for the first time a description of life as written by adults who were prematurely born, many of whom have disabilities. These letters are a rich, frank, and quite moving testimony to their adaptability, resilience, and determination and their satisfaction in achieving more than was ever expected of them. Many readers may not be able to read through these letters with dry eyes. As a neonatologist, I certainly couldn’t.”

“Preemie Voices is an amazing volume telling amazing stories by tiny infants who weighed two pounds or less at birth. When our daughter was born in 1977, very little was known about the prospects of premature infants. Had this volume been available thirty-seven years ago, life would have been ever so much easier for us and for our immediate family.”

“We don’t often hear what the preemies have to say about their lives. Are they enjoying their life? Have they had challenges to face? I think this book would inspire parents and preemies alike.”

Dr. Saroj Saigal obtained her medical degree in India and trained in newborn medicine at the universities of Edinburgh, McGill, and McMaster. She joined McMaster University as a neonatologist in the newly-opened Neonatal Intensive Care Unit in 1973. At the same time, she started the Neonatal Follow-up Program for premature infants, one of the few such programs in the country at the time, and was the medical director for forty years. Dr. Saigal has been Professor of Pediatrics since 1984, is currently Professor Emerita at McMaster, and continues to run the follow-up clinic. Dr. Saigal is the recipient of several prestigious awards from both the Canadian and American Pediatric and Neonatal Societies for her lifetime achievements and many contributions to research and the care of high-risk infants. She has numerous publications in leading medical journals. Dr. Saigal is internationally recognized for her studies focusing on the quality of life and consequences of having been born extremely premature. This is her first book for a general audience.