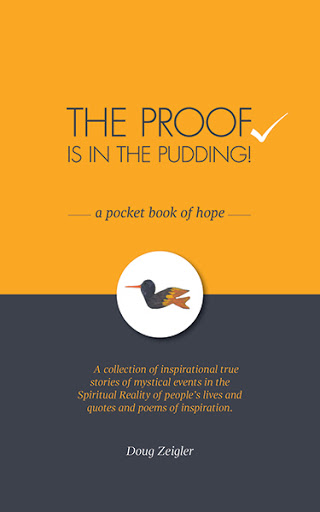 The book title: “The Proof is in the Pudding” means that to fully test something you need to experience it yourself. My goal was to prove that we do have a Soul and there is a Spiritual Reality, why I wanted to prove this was because I have had many spiritual events in my life; When I was three years old I had a near death experience, so I knew I had a Soul, because I was outside my body and able to travel until I returned to my body. However I never told the public until 2010, in an article I wrote for a magazine. Later in life I found a need within myself to find the answers to my experiences. So after many years of studying these events of my own and others, including social research of Ancient Philosophers, I found they believed there is a Spiritual Reality and it was the cause for the Physical Reality and our world. They also believed that there was a higher power that created all there is in both realities. Metaphysics was their world view. So the hope I wish to bring from this book is this, if we utilize our Soul we will gain the insight to all our problems and be able to solve them. Here are two quotes from Ancient Philosophers, that have changed my world view on being our true selves!

“Plotinus’ believed that man should reject material things and should purify his Soul and lift it up to a communion with the ‘ONE’ Internet Encyclopedia of Philosophy – good summary of Plotinus’and his teachings.

“Those who obtain divinity become Gods... but by nature there is only one God, but many by participation.” Boethius 480 AD to 524 AD – Philosophy 100 Essential Thinkers – Philip Stokes, page 82.

I believe it is possible to be less materialistic and align our Soul with a higher power to live like a God serving mankind, like others have demonstrated, it just might be the best parent, member of your community etc; or try living your best by practising the St. Francis Prayer in your daily affairs. This will allow you to live in wholeness, the benefits are great.

I think my pocket book of hope may help people be more open minded and seek truth.

He was born in Vancouver BC, Canada, he grew up in Victoria BC. He left Victoria in 1967 to find work in Alberta at the age of 21. Then in 1969 went back to school. His education: BGS in 1989, from Athabasca University and his Speciality is Social Psychology. He also holds an Associate Diploma in Business Administration (1972) and Leisure Education (1977) from Mount Royal College. He was a professional Human Services Worker for over thirty-five years, and now retired. He worked mostly with people with disabilities creating preventive social programs, job creation projects, health programs and career & employment counselling services. His employment was with non- profit agencies, all three levels of government and as well did varies contract social research in his field of expertise for varies government departments and private agencies. He also was involved in the volunteer sector for many years serving the public. His personal philosophy is to serve others and believes this is his true purpose in life.” This is what brings joy and happiness to our Soul.