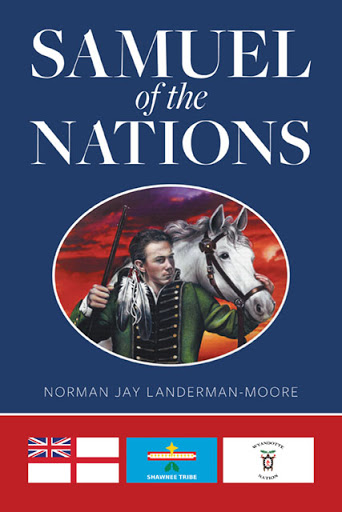 Samuel of the Nations
by Norman Jay Landerman-Moore

Occasionally, unknown individuals engage in momentous events. They associate with iconic people standing at the heart of nations. Samuel Saunders is one of these. Beginning at age 15 and continuing until his demise, Samuel of the Nations chronicles a lad engaged in events dramatically affecting people and nations on a continental scale. Based on first-hand accounts and historical records, the reader will experience, through Samuel’s eyes, decisive clashes and convulsion of cultures during the 18th and 19th centuries. Details of tribulation in the Caribbean, American Colonies, and Canada and among Native American tribes become personal testimonies of truth. It is the story of real people engaged in events that set monumental changes in motion within the western hemisphere. Changes affecting the world well into the modern era.

Embraced as a son by Daniel Boone, Samuel helped blaze the Wilderness Road and construct Boones Fort. Near there, Samuel and his friend William McQuinney were attacked by Shawnee warriors. William was killed while Samuel, taken prisoner, was adopted into the Shawnee Nation, launching adventures he could never have anticipated.

After three years in research the author, Norman Jay Landerman-Moore, set about writing this creative non-fiction novel, bringing human drama, adventure and national movements to greater heights of understanding while revealing a love story between an English lad and a Shawnee girl that began generations of some incredible people. It all began in Cardington, Bedfordshire England. The year was 1760.

SAMUEL OF THE NATIONS HAS BEEN ONE OF THE MOST DRAMATIC AND FASCINATING JOURNEY’S I’VE EVER BEEN EXPOSED TO IN CREATIVE NON-FICTION LITERATURE.

Born in 1940, Norman is a descendant of several of America’s earliest families, arriving in the Virginia Colony from England and Scotland in 1607, 1611 and 1620. After a long career in Strategic Planning and Economics, Norman set his efforts to writing. His creative, non-fiction historical novels focus on what really happened, how and where it happened and who was involved. Such is discovered in Samuel of the Nations, Jaded Horses, Quindaro, and other works to be published soon.

Genealogical sources and archived fields ripe with information, first-hand accounts and imagery retained in libraries of London, Toronto, Kentucky, Ohio and Virginia, including William and Mary College, and government vaults, provide a rich source of evidence for writing about ancestors, individuals, and events that are true. Creative and culturally tuned dialogues bring history and people into view, immersing readers in the joy and trials of lives and nations; events that befall renowned and relatively unknown people engaged in common purposes, be they, enemies or friend.

Among many noteworthy people, Norman is related to Chief Oconostota of the Cherokee, George Washington, Thomas Jefferson and John Gadsby Chapman, artist of the Baptism of Pocahontas. Norman resides with his wife Mary on Fidalgo Island in the beautiful San Juan Islands of Washington State, United States of America. He has written three novels, one short story and is working on two additional novels.