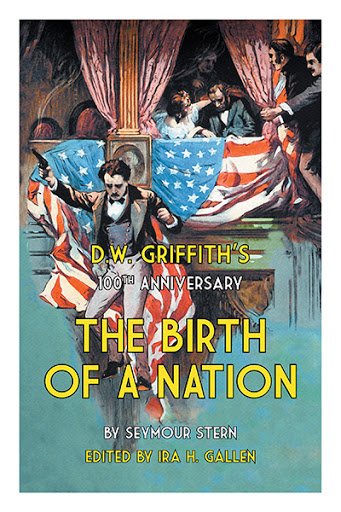 D.W. Griffith's 100th Anniversary The Birth of a Nation
by Ira H. Gallen and Seymour Stern

A HISTORY OF THE MOST CONTROVERSIAL MOTION PICTURE EVER MADE

A hundred years have passed since the masterpiece of David Wark Griffith, The Birth of a Nation, first appeared on the screens of America, in the winter of 1915. It demonstrated that the cinema, no less than literature and no less than the stage, could become a topic of serious critical, esthetic, intellectual, political, social, and technical discussion. In this way it brought the motion picture into a position of commanding influence in the social life of the American nation.

As Griffith’s official biographer Seymour Sterns main purpose of his book was to assemble, as extensively as possible, the rapidly vanishing record of what happened. You’ll find Stern’s writing on the subject as controversial as the film itself.

There is no doubt in my mind that Seymour Stern was the greatest film critic America has produced. It is unfortunate that he has been transformed into a “non-person” by the cinema establishment. - Herbert C. Roseman-The Revisionist Press

Ira Gallen has captured the essence of a sensitive tortured kindly and at times an intellectually violent genius, Seymour Stern. – Dr. Irving Sussman

Seymour Stern provides film buffs, historians and silent movie fans with a comprehensive and compelling volume on how “the father of American film” created his controversial epic. It’s the definitive reference book as the film reaches its Centennial year. – John A. Gallagher –director/historian.

We all have our heroes in life, some look up to Baseball players, Politicians, Astronauts, Actors or even filmmakers. For Seymour Stern it was a director named D.W. Griffith. In fact it became an obsession that Seymour would take to his grave. Seymour Stern was a man obsessed: with the life and work of D.W. Griffith, with the future of artistic cinema, and with the development of a responsible yet impassioned film criticism in America. His lifelong pursuits led him toward some brilliant contributions in all these areas; they also led him astray in the directions of selfindulgence and frustration. His magnum opus on Griffith was never completed, and his increasingly insular ways detached him from many of his colleagues and public. Above all, his strange obsession with Griffith haunted his life, as it continues to haunt those who would follow his footsteps. Writer/historian Ira H. Gallen has spent over a decade going through all of Sterns published and unpublished documentation on The Birth of a Nation, to create one of the most comprehensive and compelling volume on how “the father of American film” created his controversial epic. It’s the definitive reference book as the film reaches its Centennial year.

D.W. Griffith's 100th Anniversary The Birth of a Nation has been nominated by our staff as one of their favorite books.