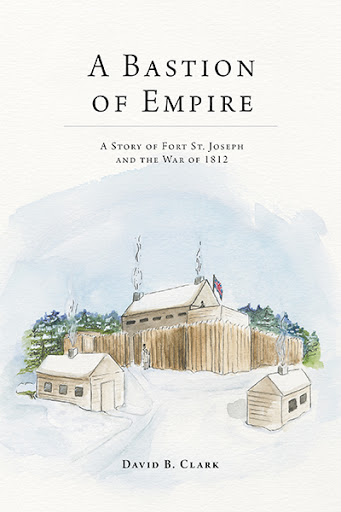 A Bastion of Empire
A Story of Fort St. Joseph and the War of 1812
by David B. Clark

In the late summer of 1809, Louis Cloutier, 18, is aboard the "Nancy," a schooner of the North West Fur Company, sailing from Fort Amherstburg on a journey of 400 miles, and heading for Fort St. Joseph, the furthest northern British outpost.

This is a small fort, located in the wilderness, isolated from the outside world, particularly during the long hard winters. Forty soldiers garrison the fort. The British Indian Department has a post there, where Louis' father is employed as the new store keeper; the Department assists the traders in their dealings with the Indian tribes; also, to ensure the continued allegiance of the Indians to the British crown. The fur trading companies have facilities outside the fort. Their agents are mostly Métis with their voyageurs mainly from Lower Canada.

The people of the fort are thrown together, dependent on each other for survival, and tangles occur in their relationships, often leading to dire consequences.

Louis meets a Métis kitchen helper, Giselle Lortie. In 1812 war breaks out, he leaves her, to accompany Captain Charles Roberts in his expedition to capture Fort Michillimackinac from the Americans.

Louis finds his Ojibwe grandmother, when the dramatic conclusion of the story unfurls.

Dr. David Clark was born in North China, in 1929. He obtained his BA degree from Oberlin College in 1951 and his MD,CM degree from McGill University in 1956. He served as a medical officer in the Canadian Army, was in general practice, then took residency training in psychiatry at the University of Western Ontario, obtaining his Royal College Certification in 1966. He practiced psychiatry in Barrie, Ontario, until his retirement in 2009.

He has written six historical novels. The first three, called the "Canadian Army Trilogy," pertained to the two world wars. Another novel was on the war with Japan in China, and the last two have been about the War of 1812. There is also one novel about a psychiatrist, and the process of therapy with patients.

The author has been a lifelong student of military history, particularly that of Canada, and has collected an extensive library of historical texts. His wife Flora is a retired associate registrar from the University of Toronto. They raised three sons, and have two granddaughters.