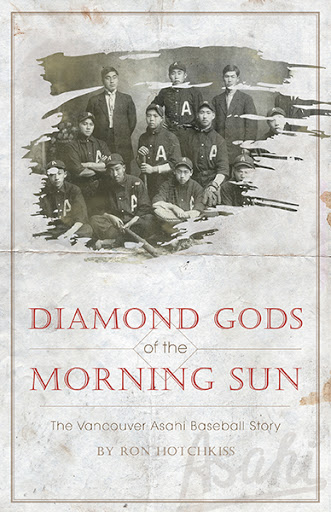 This is the story of the Asahi, a Japanese Canadian baseball team that was formed in 1914 and competed in Vancouver's Caucasian leagues between 1918 and 1941. Using a strategy called "brain ball," the smaller Japanese defeated the larger white teams and won a number of championships. This describes what happened to some of these Asahi players after Pearl Harbor when British Columbia's Japanese were sent to internment camps in the province's interior. Here they played an important role in establishing baseball leagues. Following the war, many former Asahis came to eastern Canada where they continued to play an important role in baseball as they began new lives. There is a second story here as well. It is about a former Asahi fan who was determined that the Asahi legend would not die and how she insured that what they meant to the Japanese community before World War II would never be forgotten.

Ron Hotchkiss is a retired high school history teacher who became interested in sports history when researching and writing a book about Canada's first women's Olympic team. "The Matchless Six:" was published by Tundra Books in 2006. His interest in the Asahi came about when he attended a miniature show with his daughter at the Japanese Canadian Cultural Centre in Toronto. There he came across a photograph of the last Asahi team, which led to the writing of the book.