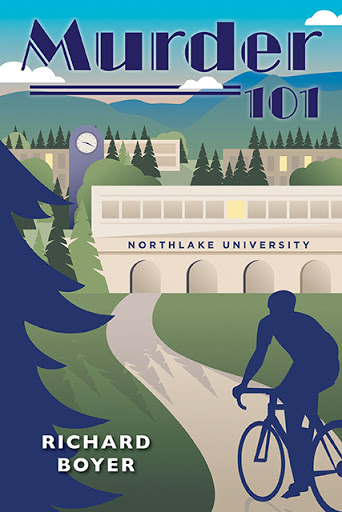 Murder 101 opens with Professor Bruce Monroe and the new president of Northlake University on a hike in the mountains, near Vancouver. Two days later, the president is found dead in his office.

The police call it a case of misadventure, but Professor Monroe suspects something more sinister. He abandons his nearly finished book, crucial for his promotion, to scour the campus for clues. Suffering professionally, he is nevertheless relentless in getting to the truth about the president’s death.

With an everyman sleuth who is smart, funny, a little distracted, and committed to his students and research, Murder 101 reveals the dubious priorities of a modern Canadian university and the actions of a ruthless killer. If Professor Monroe is to unravel this mystery, he’ll need to survive his curiosity and cultivate a community he can trust.

deeply into campus activities in Boyer’s debut whodunit . . . .A very leisurely but ultimately

enjoyable romp through the quagmires of academia."

"Honor trumps ambition in the cheeky mystery novel Murder 101, wherein a curious professor refuses to be stymied by university bureaucrats."

"I loved this book! A well written, cleverly plotted, hugely entertaining romp through the (almost literally) backstabbing world of academia. A treat for anyone who’s spent any time in a university community. Boyer uses his deep understanding of the pressures and conflicts facing today’s academics to create a cast of well-rounded, fl esh-and-blood characters."

"Three cheers for the suspicions of Professor Monroe, humanist hero in this comically believable story of malice, murder, and loss on the modern campus. Required reading for all Presidents and administrators."

For thirty years, Richard Boyer taught history at Simon Fraser University, a campus with some resemblance to the fictional setting of Murder 101.

Like his professorial protagonist, Richard's academic research had a forensic bent, focusing on records of the Mexican Inquisition, and what these revealed about the lives of ordinary people.

His Lives of the Bigamists: Marriage, Family, and Community in Colonial Mexico won The Canadian History Association’s Wallace K. Ferguson Prize (1996), for the outstanding scholarly book in a field of history other than Canadian history.