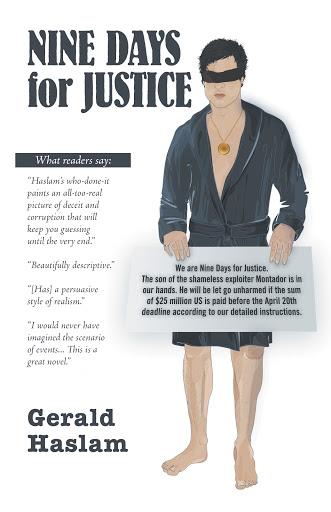 Is it the militant group Nine Days for Justice, which claims credit and demands a $25-million ransom? Does the group really exist, or is it just a smokescreen? Is the abduction part of a struggle within the mighty Montador family?

Captain of Detectives Antonio Zelenka – The Bloodhound – is in charge of the case, under the watchful eyes of his meddlesome boss and the young man’s billionaire father.

The detective and his team work their way toward finding Luis, confused by false trails and a pervasive feeling that the key to the mystery is just barely out of reach. In the end, Zelenka discovers the vital clue. Then, the question is, can the victim be rescued before his captors disappear with him, or worse?

What readers are saying:

"Haslam's who-done-it paints an all-too-real picture of deceit and corruption that will keep you guessing until the very end."

"[Has] a persuasive style of realism."

"I would never have imagined the scenario of events... This is a great novel."

Gerald Haslam has been writing for publication since the age of 12, when he covered a school track meet for a small daily newspaper. During a career as a journalist he’s written many hundreds of newspaper stories, editorials, columns and magazine pieces, plus an inspiring non-fiction work, ‘Heroes Next Door,’ published by Coast Mental Health Foundation.

The advent of self-publishing gives him a new opportunity to do what he does best: tell interesting stories about fascinating people.

Gerry is married to Pat, lives in Vancouver, BC and loves travel and golf.