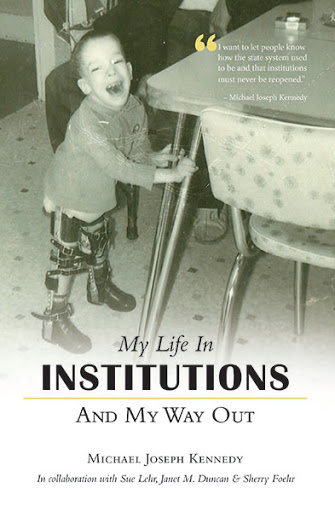 This is the story of Michael Kennedy's life. Born in 1960 with significant disabilities, he describes his early experiences living in three different institutions for the mentally retarded and how he had to become his own advocate if he was going to survive. He soon realized that, unlike most of the others in institutions, he could make his voice heard. He had to speak up to help himself and other individuals with developmental disabilities to learn about their rights, and how to prevent themselves from becoming trapped forever within complicated state bureaucracies.

After moving out of the last institution into various types of supported living settings, Michael describes how he found new friendships, went to school, got a "real" job, and began to aspire to having full control of his own life.

"I want to let people know how the state system used to be and that institutions must never be reopened." This is a book about hard work, resilience, and hope. It is an extraordinary life story, but told by an ordinary man with a clear mission to help others like himself.

Michael Kennedy has worked as a Field Assistant for the Self-Advocacy Association of New York State since 1996. He spent over twenty years living in state run institutions where he learned the importance of self-advocacy, despite some gruesome consequences. Today, he lives with his wife of over twenty years, and their two cats, in a fully accessible house which they own.

Sue Lehr is a retired teacher and disability activist who loves reading, writing, sewing and being with her family. She and Michael have been friends for more than thirty years.

Janet Duncan works at the State University of New York College at Cortland where she teaches future teachers. She met Michael while in graduate school at Syracuse University.

Sherry Foehr lives in Germany where she runs the Writing Center at the University of Heidelberg. She has known Michael since childhood.