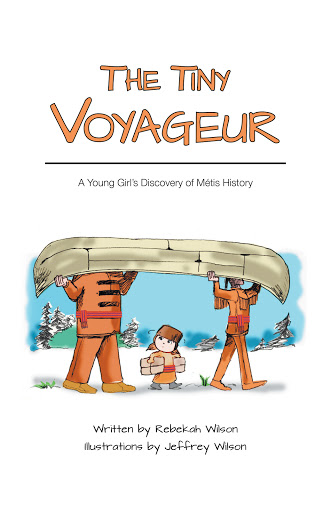 A curious young girl who asks her grandmother to tell her a bedtime story about her Métis ancestors goes on an adventure of a lifetime back in time. In her dream, she learns about Métis traditions, the Michif language, accompanies her great-great grandfather on a fur trade and brings back a very special souvenir from the past.

Besides being the proud daughter to illustrator Jeffrey Wilson, Rebekah’s greatest passions include sport, culture, youth leadership, journalism and music. Rebekah is a proud citizen of the Métis Nation of Ontario and a Sheridan Institute of Technology Alumni following her studies in Print Journalism at the Trafalgar Road Campus from 2007-2009.

In 2009, Rebekah worked as an editorial intern at the Creemore Echo before moving to Ottawa where she worked at the Métis Nation of Ontario as a registry and communications assistant. In 2010, Rebekah was chosen to be one of 350 Aboriginal youth from across Canada to dance in the opening ceremonies of the Vancouver 2010 Winter Olympics as well as take part in the Indigenous Youth Gathering.

Rebekah now works as the GEN7 Program Coordinator with Motivate Canada, an organization that specializes in improving the lives of young people by fostering civic engagement, social entrepreneurship, social inclusion and leadership among youth through sport and physical activity.

Besides being the proud father to author Rebekah Wilson, Jeff’s background includes being a cartoonist, illustrator, graphic artist and animator. He helped storyboard the classic 1980 Canadian film PROM NIGHT and was a key animator in the 1987 ADVENTURES OF TEDDY RUXPIN animated TV series.

In 1993, Jeff became an author himself, publishing SINCERELY CHORES: SKETCHES OF A FARM FAMILY, a collection of his AVRIDGE FARM weekly comic, which has appeared in community and farming publications across Canada. Jeff was on the council of the Grey-Owen Sound Métis Council in the late 2000s, where Jeff’s mother and Rebekah’s grandmother, Leora Wilson, served for many years as Senator.