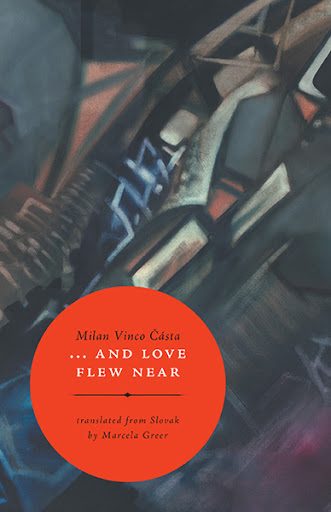 ... and Love flew near
translated from Slovak by Marcela Greer by Milan Vinco Částa

Milan Vinco Částa’s anthology ...and Love flew near has a special place in Slovak poetry. His poetry is not part of any trend. It could belong, perhaps, to spiritual poetry with its powerful emotional charge, in which love is the centre. These modern poems are exceptional in their uniqueness to express intense personal views. The reader will be touched by prodigious passion, and with the author’s belief that only LOVE is an eternal value that is able to guide a person on his journey through life.

I am thrilled to introduce to the English-speaking world the poetry of Milan Vinco Částa entitled “...and Love flew near.” I am very glad to be able to share his rich emotions of passion, love, sorrow, and hope. In his own words: “Women are extremely important beings on this Earth. The Creator gave them immense responsibility, therefore it is important to talk about women. Love equals women and they enlighten us.”

Milan Vinco Částa’s contemporary poetry employs an unusual vocabulary that gives us the freedom to move to the deepest and highest feelings of the human spirit.

Milan Vinco Částa was born July 20, 1952 in Nitra, Slovakia. He is an accomplished contemporary poet with an extraordinary life. He has felt a thirst for freedom and justice since he was a child. Milan Vinco Částa was not afraid to openly criticise the communist government in the former Czechoslovakia and therefore he was persecuted and later deported against his will to Austria. His rich life experience and mastery of the written word creates poetry that touches the deepest part of our being.

Milan Vinco Částa’s creative spirit has been and is constantly providing us with more of his writing. In 2004 Čakanka published one of his greatest written works, “...and Love flew near.” In 2007 his book of poetry “Eternal love for Dorothy Tuwak” (2005) was translated into French, and in 2008, he translated the work of his favourite Russian poet Velimir Chlebnikov, “Blue sky of fluttery wings” (2008).

Milan Vinco Částa is seeking the meaning of life. He portrays human struggle to find inner peace, love and happiness. He has a passion for life, people and nature.

Milan Vinco Částa received a jury award for his poetry anthologies “From the depths of love” (1987) and “In the depths of shadow” (1988) in the literary competition in honour of Š. B. Roman, which was organised by the world convention of Slovaks in Semering, Austria during the summer of 1989.