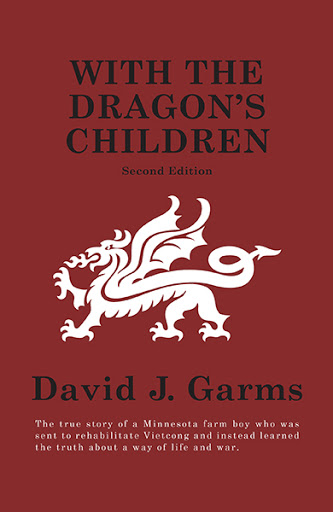 With The Dragon's Children
by David J. Garms

David Garms’s With the Dragon’s Children is the first-hand account of interactions with Vietcong who responded to the South Vietnamese government’s amnesty program. The narrative, packed with information about Vietnamese attitudes, aspirations, and reactions to the war, explores their rich history and culture, and discusses the operation of the amnesty program. After valuable experience with the Peace Corps in India and on assignment with USAID (U.S. Agency for International Development), the author received intensive instruction in Vietnamese language, history and culture.

Assigned to a small province (Go Cong) in the Delta as the civilian U.S. advisor to the amnesty program for the Vietcong, he worked with—and befriended—about one thousand former Vietcong. A fascinating picture of farmers, bureaucrats, soldiers and merchants emerged out of this experience.

Based on extensive notes, unclassified documents, books, and interviews carried out over a three-year period in Vietnam, With the Dragon’s Children is the only book written about the U.S. supported amnesty (Chieu Hoi) program for the Vietcong.

"A lanky, idealistic Minnesota farm boy and ex-Peace Corps volunteer, Dave Garms joined the U.S. Agency for International Development (USAID) in 1967. He soon found himself immersed a nasty rural insurgency in Vietnam. Garms never fired a shot, but he was worth a battalion of less perceptive counter-insurgents. His most effective weapons were patience, sympathy and a deep respect for the Vietnamese. They included a handful of dedicated but often conflicted government functionaries; a motley crew of would-be cutthroats (whom he tamed); and hundreds of disaffected Viet Cong who had wearied of the fight but weren’t sure what to do (he welcomed them). In With the Dragon’s Children Dave Garms explains how he dealt with all of them. His instructive tales introduce you to some fascinating characters (like Mr. Cat, the burned-out bureaucrat whom Garms reawakened) and to a gifted people most Americans never saw, let alone understood.

Read this book, and be proud of your country again."

Former USAID officer and Author of Good Guys: The Men Who Tried to Pacify Vietnam

David J. Garms was born and raised on a farm in southern Minnesota. He received his BA from Gustavus Adolphus College and subsequently joined the Peace Corps, serving two years with an agricultural program in northern India. He received his MPA from the University of the Philippines and PhD from LaSalle University.

After his assignment with AID in Vietnam, he served in Bangladesh, the Philippines, Malawi, Sri Lanka and Italy.

He and his wife, Barbara Carter-Garms, make their permanent residence in Fairfax, Virginia, U.S.A.