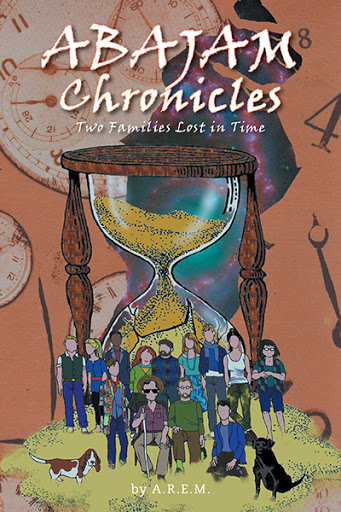 Albert Meisner is really incensed; not only is he being blamed for the catastrophe that transported his whole property, his family, their friends and two unexpected guests to this peculiar world; the whiskey he’s been drinking is having no effect on him!

The truly culpable person is Frank; his future son-in-law who is now in a coma from the power surge precipitated by his experimentation with the ‘harmless’ alien objects Albert had salvaged a dozen years earlier from the wreckage of a spaceship. Albert learns that just moments before the catastrophic event catapulted them to this place, the secret service and army had been situated right outside his front gate about to raid his home.

As all vestiges of 21st century life have disappeared, the question becomes not where are they, but when? Though Albert boasts he’s just a ‘simple trucker’, he sets out to chronicle all the events that may have contributed to their predicament in the hope of discovering how it could’ve happened and who or what really caused it. As if things couldn’t get worse, a shovel and pick-axe being used to fortify the compound against a possible attack from their new neighbours go missing.

Great story. The many chatty asides and wealth of details gradually made me quite fond of the characters, as if I had actually met and knew them. I found it extremely readable, and looked forward to sitting down with it every evening.

Thanks so much for letting me read your book. You have managed an amazing accomplishment with ABAJAM Chronicles. You are a writer with native ability that simply can’t be taught in school. As a professional editor, I don’t fart around when it comes to handing out praise to writers.

Thanks for letting me read your book. I enjoyed it very much; it was a real page turner. The story unfolded in familiar places with genuine characters. It was like going home! Except for the Aliens of course…never saw any Aliens in Timmins...

A.R.E.M./aka/Alfy R. E. Meyer has been a professional truck-driver and successful Owner/Operator for 35 plus years. Alfy is a part-time freelance writer whose articles and editorials have appeared in a number of national award winning trade publications such as Today’s Trucking, Highway Star and Truck News. Known as The Intrepid Trucker, he regularly ‘blogs’ about the health and state of the trucking industry and its drivers; injecting life, humour and some anecdotal common sense into his writing. A.R.E.M. is a frequent guest on Canada’s premier land based Trucker Radio station as the ‘Health and Fitness Guru.’

A.R.E.M. lives in Kitchener, Ontario with his wife of thirty-eight years and one cat. To read or join his blog or hear him on Trucker Radio, go to www.theintrepidtrucker.com or www.truckerradio.com.