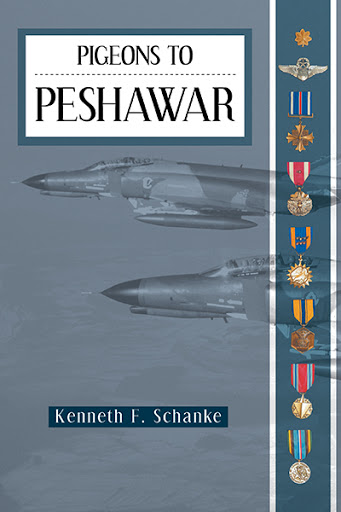 An amazing story—even more so because it’s all true. City-born and country-raised, Ken developed a need to fly and found a way to do it. While recalling his career as a USAF navigator, he relates to the history of the ‘60s, ‘70s and ’80s—linking people, places, aircraft and adventures that circled the globe. In an early chapter, Ken describes in detail crossing the Atlantic, southern Europe and the Middle East to ferry a rare jet bomber to Peshawar, Pakistan. Later, the decorated aviator recollects a dangerous flight to the South Pacific, through a hurricane, becoming lost overwater with only a sextant to find a tiny island and procure the safety of his crew. After that, following three years in the C-130 aircraft in Europe, he transitioned to the F-4 Phantom II fighter for the rest of his career. He details missions and the use of smart weapons during his year in combat in Southeast Asia. During the ‘70s, he returned to Germany for six more years in the F-4, which involved sitting nuclear alert and training for all other missions.Twenty-one years in the USAF with more than 5,600 hours of flying provides for many intriguing war stories from the backseat.

Ken Schanke is an ardent aviator who started flying at 16 and never quit. While still in junior college, he qualified as an aviation cadet and graduated top of his class from navigator training. While flying the B-57D during nuclear testing, he penetrated three nuclear clouds during Operation Dominic. On side trips, he also flew the C-54G and WB-50D aircraft, both direct links to WWII and Korean era aircraft. Following a year in combat flying out of Thailand, Schanke returned to George AFB in southern California, where he obtained private pilot certification and went on to receive a commercial pilot license, as well as Certificated Flight Instructor (CFI) and ground instructor licenses. While assigned to Ramstein AB, Germany, serving as Chief of Training, Schanke ran and organized the Ramstein Air Show for four years.

Married for 37 years, he and his wife Fernande reside in Tucson, where he enjoys travel, golf and volunteer work in the community.