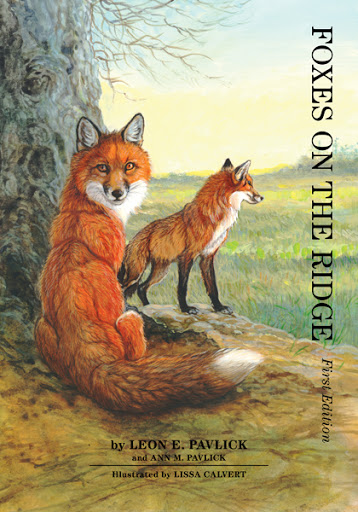 Foxes on the Ridge
by LEON E. PAVLICK and ANN M. PAVLICK

On a ridge in southeastern Manitoba, a litter of pups marks the beginning of a new life cycle for the species. The story that follows is told by one of the pups as if it were a human. From “the world outside the den being scary but wonderful” to “summer breezes – with their nose messages”, the story will please the senses and stir the emotions.

Throughout the book, illustrations by the renowned nature artist Lissa Calvert complement the story most effectively. The overall result is a delightful, educational experience. It ends appropriately with renewal; the beginning of the next life cycle.

Available in Paperback and eBook format from: www.friesenpress.com

Leon E. Pavlick (1939 – 2003) was Curator of Botany at the Royal British Columbia Museum for almost two decades. He was an internationally recognized plant and tree expert. He graduated from the University of Victoria, British Columbia with a Bachelor of Science (Honours Botany) degree, and followed that with a Masters of Science, Botany, (Honours) degree from Washington State University. Leon was recognized for his work by the governments of British Columbia, Canada and the United States.

Leon was humbled when invited to join the Sigma Xi Society, the international, multidisciplinary research society which honours scientific achievement. He was included in the American Biographical Institute 2004 edition of “Great Minds of the 21st Century” and received the International Cultural Diploma of Honour.

Further accomplishments can be accessed on the web: Google Leon E Pavlick Botanist Ann Marie Pavlick, the anonymous someone on pg. 35 of the original Red Pines, was a special education teacher who contributed the “delights” in the Ridge series books. Recently she was accepted for membership by the Arts Council of Greater Victoria.

Lissa Calvert’s work hangs in museums and galleries internationally, and she has had numerous exhibits. However, she has maintained a fascination with nature that draws her to portray its complexity and harmony from first-hand experience. Her work can be viewed on the web at www.lissacalvert.ca

Foxes on the Ridge will be available in the FriesenPress Bookstore soon.