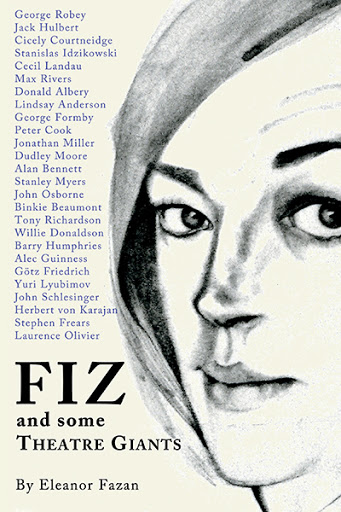 FIZ
and some Theatre Giants
by Eleanor Fazan

“Tell the truth,” her friend the director Lindsay Anderson urged Eleanor Fazan. “It’s seldom heard.” Nor is it easy to tell.

But that’s what “Fiz” has done: delivering frank and intimate accounts of her not-always-peaceful collaborations with the brilliant figures she has worked with over the decades – on stage in London’s West End, on screen, and in opera.

It’s an amazing line-up: among performers, from Jack Hulbert, Cicely Courtneidge and George Formby to Barry Humphries, Alec Guinness, Laurence Olivier; among directors, Tony Richardson, John Schlesinger, and Stephen Frears; among writers, John Osborne and the legendary Beyond the Fringe team – Alan Bennett, Peter Cook, Jonathan Miller, and Dudley Moore. Along the way we get musicians too: her husband Stanley Myers, composer of “Cavatina,” the haunting theme from The Deerhunter, and the god-like maestro Herbert von Karajan.

Fiz’s memoir offers a modest, frank, and often startlingly perceptive account of the delights and difficulties of working with some of the most brilliant – and utterly impossible – writers, directors, and performers of the last sixty years. Her true stories of professional relationships are funny, affectionate, sometimes searing; always enlightening about the agonies and ecstasies of what goes on behind the scenes.

“I had a wonderful time reading this book. The insights contained are fascinating, lively and very fresh.”

“It's an extraordinary career that begins with George Robey and ends with Herbert von Karajan. But Eleanor Fazan has had a remarkable life, in which I and my colleagues Peter Cook, Jonathan Miller and Dudley Moore are lucky to have figured, when in 1961 Fiz directed our revue Beyond the Fringe. As director and choreographer she was part of the theatrical revolution at The Royal Court Theatre in the late 50s, and has worked with all the leading theatre and opera directors of our time. I can't believe they have all been as kindly as Fiz makes out; but then she is such a generous, understanding person herself.”

“In this remarkable memoir Eleanor Fazan reveals an impressive range of often unfamiliar details of the theatrical world in which she played such a significant part in mid-twentieth century England.”

"This is a must read for all drama and dance students, and everyone for whom the theatre is a life as well as an art." 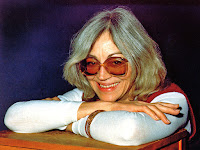 “What decided you to become a director?” the Queen asked Eleanor Fazan, at the production of Grab me a Gondola at Windsor. “Well, when I was pregnant I put on so much weight that no one would employ me as a dancer,” replied Fiz. Her Majesty burst out laughing.

Eleanor Fazan – known in the profession as “Fiz” – has covered the ground. Born in Kenya, as a teenager she came to London to train as a dancer at Sadlers Wells, and her career since then has taken her all over the world. It spans the decades and the disciplines too. As dancer, director, and choreographer, she has worked on stage and in film, television, and opera. Her shows in the West End included the hits Grab Me a Gondola, Blitz! and Beyond the Fringe; her film credits Tom Jones, Cold Comfort Farm, and Mrs Henderson Presents: her work in opera Salomé, the Ring cycle, and Otello (starring Placido Domingo).

Married to the composer Stanley Myers, her friendships and professional collaborations among dancers, actors, divas, and directors have given her a deep understanding of the artist at work. In 2013 Eleanor was awarded the O.B.E. for her services to dance.