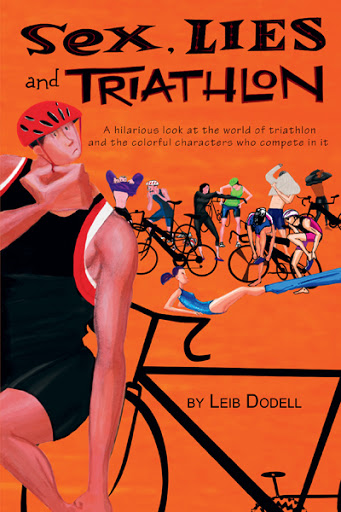 Triathletes are a unique breed. Amateur triathlete and humorist Leib Dodell has been living among them for years, often chronicling their foibles and eccentricities in the pages of Inside Triathlon magazine. Whether you are a beginning triathlete, a battle-tested age-grouper, or an elite competitor, the hilarious stories and anecdotes in Sex, Lies and Triathlon perfectly capture the triathlon lifestyle. Or maybe you’ve never even considered doing a race, but there’s a triathlete in your life somewhere — a relative, colleague, boyfriend or girlfriend, or (God help you) a spouse. Sex, Lies and Triathlon will give you a wickedly funny, if somewhat frightening, glimpse into their world. Here are a few examples:

“Basically, a good hard workout is like the exact opposite of casual sex: You always dread it beforehand, but afterwards you’re always really glad you did it.”

On warming up before a race:

“I generally consider it a successful warm-up if I can find a reasonably clean bathroom with toilet paper and a door that closes — and that’s just in my apartment.”

On winning the “lottery” to compete in the Hawaii Ironman:

“Competing in the Ironman is hardly the kind of windfall one normally associates with winning a lottery. It’s like getting a letter in the mail that says, in giant 24-point type, ‘CONGRATULATIONS! YOU MAY HAVE ALREADY WON 12 HOURS OF EXCRUCIATING MISERY AND PAIN!!’”

Leib Dodell is an attorney, writer and extremely amateur triathlete (some would say extremely amateur attorney and writer as well). For a dozen years, Leib wrote a column called The Lighter Side in Inside Triathlon magazine, focusing on the foibles and eccentricities of the average triathlete (as if there were such a thing). He currently lives in Kansas City, MO with his dog Bear, where he (Leib) runs a specialty underwriting agency providing professional liability insurance to publishers, authors, websites, advertisers and other media and technology companies. This is his first book.