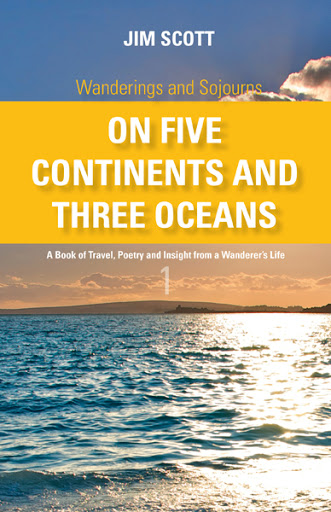 On Five Continents and Three Oceans
A Book of Travel, Poetry and Insight from a Wanderer's Life
by Jim Scott

In this, the first of the Wanderings and Sojourns series, the reader is taken on a variety of journeys spanning all the continents of the world except Antarctica and Australasia. They’ll travel by sea and land through Caribbean islands and sub-Saharan savannah, South American mountain ranges and rivers of Asia, North African markets and verdant English valleys, all the while living the adventures and experiences that gave rise to the unique philosophies shared within these pages.

Interspersed between these true stories are works of lyrical verse; songs as varied as the wanderings and sojourns from which they were born. Themes vary from sharing of wisdom among travelers to respect for one’s rifle during insurgent war, transition of a boy into manhood or the last portage two adventurers will ever share.

The world beyond convention is the canvas upon which these unusual stories and songs are painted, the pallet comprises an entire spectra from shipwreck to war, spirituality to atavism, Aboriginals to ghosts, and the resulting pictures provide a fascinating view of the world as seen through unusual windows by someone who doesn’t quite conform to the norms of society.

Born in England, raised on the banks of a river in the Sussex countryside, Jim Scott from a young age developed strong spiritual connections with the natural realm. He wasn’t to understand this until much later in life when this realization explained the somewhat unique atavistic philosophies that evolved from his extensive travels and often ran against the grain of mainstream thinking.

Mostly working and often living in close proximity with nature, he developed a profound respect for the balance of how life is lived according to the planet’s natural wisdom. This is represented in his writing where he is not shy to criticize what he considers the synthetic, artificial worlds of cities, industry and reliance upon financial success, while advocating environmental causes, bucolic lifestyles and indigenous groups who yet follow the Old Ways of natural balance. Such views, backed by extensive and diverse experience within many realms of human existence and coupled with a keen interest in the written word created the perfect opportunity to express what he has seen and believes within his many fascinating stories, poems and essays.

The list of countries to which Jim has wandered is long: Morocco, Rhodesia/Zimbabwe, Peru, Gibraltar, India, Antigua, South Africa, Portugal, and many, many more where his sojourns were lengthy enough for adventures to be lived and insightful philosophies developed from them. It is from such experiences among such disparate cultures, landscapes, politics and economies that the stories and verses in his books were forged.

A father of three, Jim now lives in Canada and spends as much time as he can in the British Virgin Islands where two of his three children were born.