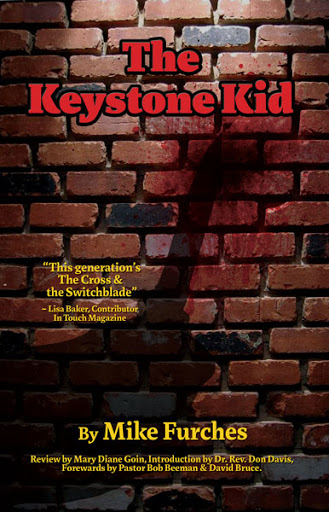 The Keystone Kid
by Mike Furches

The Keystone Kid is the unbelievable, true horrifying story of Anthony. It is a story that shows the tragedy of abandonment, physical and sexual abuse, gangs, homelessness and more. It is unfortunately a story that far too many can relate to. For those that can relate, they will recognize the continuing nightmares that go from childhood through adulthood. With all of the horror, the things missing for Anthony was acceptance, love and hope. But through the horror, in the tragedy, Anthony learned to accept himself, found love, and discovered hope. This book is for all of those who have experienced struggle, and for all of those that care enough to understand. The Keystone Kid has received rave reviews from all sectors, including those who have lived similar stories, mental health professionals, pastors, atheists, celebrities, and experts in the field of physical and sexual abuse. While told in a real way, with real language and surroundings, readers will develop and better understand those whose hearts and lives has been broken. For those who have been broken, they may discover hope and healing. Many have said, that for many, The Keystone Kid could be the inspiration to accept yourself, give you the okay to love and be loved, and find hope for tomorrow.

Mike Furches has lived an extraordinary life, from working with some of the top bands in America, to being one of the world’s foremost authorities on mental illnesses. He has been read by millions via his online work, The Virtual Pew and Hollywood Jesus. He has at times been controversial, but there is no denying many have been touched by his life, his story, and his writings. He has appeared on national television, radio, print and various documentaries. His story has been featured on Carman Times Two, and in Dr. Charles Stanley’s In Touch Magazine among others. One only has to do a simple Google to see a part of this extraordinary life. You will see him interacting with everyone from Rob Zombie to Billy Bob Thornton, and appearing in magazines such as Christianity Today and Time. He has sacrificially lived his life and served the poor, needy and abused because it is a part of his own life. He has told the story of Anthony to hundreds of thousands live, and the story is now available in print. Mike also serves as a pastor of an inner-city church, Mosaic in Wichita Kansas which seeks to reach out to those who have given up on church and want to come along for the ride. He has two grown children, Marathana and Nathan, and has been married to his loving wife Mary Jane since 1979