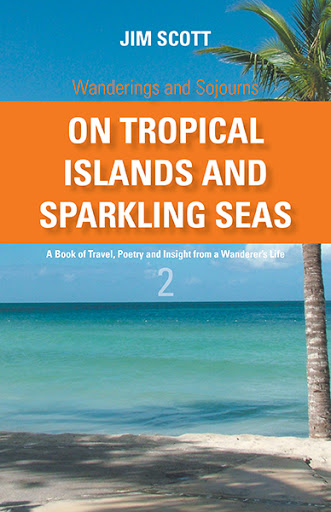 On Tropical Islands and Sparkling Seas
A book of Travel, Poetry and Insight from a Wanderer's Life
by Jim Scott

Book 2 in the Wanderings and Sojourns series focuses upon the author’s time during two decades spent mostly among the islands that lazily stretch from the Eastern Caribbean to Florida. From his first ever game of golf on a waterlogged Montserrat course to a boarding by the Coastguard in the Gulf Stream, his appendectomy at a maternity clinic in Antigua to battling a monster hurricane or diving for treasure in the Virgin Islands, he recounts with wry wit and candour, and his typical not-quite-conformist attitude and insight, just some of the episodes that made his life in the islands so fascinating.

“On Tropical Islands and Sparkling Seas genuinely has something for everyone. Intimate, deeply personal accounts of past events, laugh out loud anecdotes, thought provoking poetry, all evoking memories of happy times in beautiful places when life passed at a slower pace. Jim Scott has led a full and colourful life which thankfully he eloquently shares in his writings. A very readable book to be enjoyed at your own pace, preferably with a glass of Caribbean rum to hand.”

Born in England, raised on the banks of a river in the Sussex countryside, Jim Scott from a young age developed strong spiritual connections with the natural realm. He wasn’t to understand this until much later in life when this realisation explained the somewhat unique atavistic philosophies that evolved from his extensive travels and often ran against the grain of mainstream thinking.

Mostly working and often living in close proximity with nature he developed a profound respect for the balance of how life is lived according to the planet’s natural wisdom. This is represented in his writing where he is not shy to criticise what he considers the synthetic, artificial worlds of cities, industry and reliance upon financial success, while advocating environmental causes, bucolic lifestyles and indigenous groups who yet follow the Old Ways of natural balance. Such views, backed by extensive and diverse experience within many realms of human existence and coupled with a keen interest in the written word, created the perfect opportunity to relate what he has seen and believes within his many fascinating stories, poems and essays.

The list of countries to which Jim has wandered is long, but there are a few that have established themselves in his heart stronger than others. The British Virgin Islands is one of them and it is from his many years of living there or the adventures and voyages that began there that most of the stories in this book were born.

A father of three, Jim now lives in Canada and spends as much time as he can in England and in the British Virgin Islands where two of his three children were born.