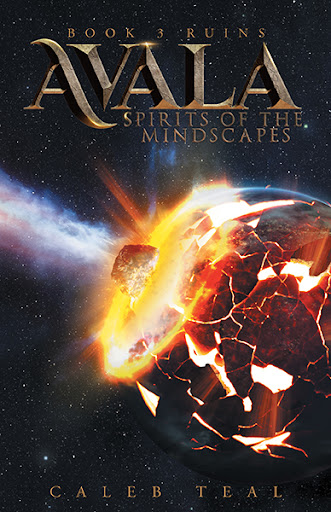 Set one year after the start of Avala Book 2, this stunning tale tells the continued story of Avala's journey to becoming a Spirit of the Mindscapes. As the war between the Republic of Earth and the Yajiran Empire continues, Avala struggles against her arch nemesis Namjila in battles across the galaxy. However in the midst of the fighting, the fate of two worlds hang in the balance. Can Avala save her people from the cruel oppressors of the Yajixa? And if so can she save them all? This is the moment she has been fighting for since she joined the Republic. Will she prevail? Or will Namjila win? This is the third installment of Avala's lifelong journey to become a Spirit of the Mindscapes.

Caleb Daniel Teal has been attempting to write stories since grade three. Since publishing his first book at age twenty-four of Avala: Spirits of the Mindscapes - Book 1: Hope, he has been spending much of his time working on nearly a dozen sequels and several spin-off series, as well as at least 2 completely different series. When he's not writing, Caleb functions as the sole proprietor of Evelon II Studios, a company dedicated to writing epic stories and creating epic video games. He also has been working on creating his own ttRPG system based on his unpublished works. Caleb lives in Ottawa, Ontario, with his father and cat, Tracer Racer.