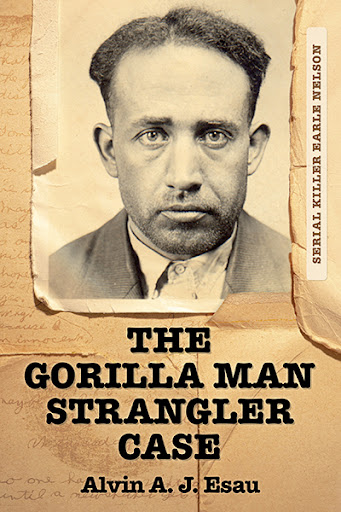 The hitchhiker seemed harmless. He was dressed in a blue suit and a colorful sweater, accessorized with a grey cap and tan shoes. He carried nothing. It was the morning of June 8, 1927, when the Chandler family picked up the well-dressed man in Minnesota and dropped him at the Canadian border. They had unwittingly transported notorious serial killer, “The Gorilla Man,” who had strangled more than twenty women from one end of the United States to the other. He would later murder Emily Patterson and 14-year-old Lola Cowan in Winnipeg. His identity was unknown.

Written by Alvin A. J. Esau, The Gorilla Man Strangler Case: Serial Killer Earle Nelson is a detailed historical account of the Canadian manhunt, capture, and identification of Earle Leonard Nelson, an escapee from a California mental institution. Drawing on archival sources, it’s the first reliable biography of Nelson, who was hung in Manitoba on January 13, 1928.

This case study also deals with various political and professional issues that arose in the pretrial, trial, and post-trial periods and spotlights the clash between Nelson’s court-appointed defence attorney James Stitt, and psychiatrist Dr. Alvin Mathers, along with the chilling role of Canada’s so called official hangman “Arthur Ellis” – all information that has never been published before.

Esau also raises various enduring issues about the social construction of serial killers, debates about capital punishment, psychopathy, the scope of the insanity defence, the effect of pretrial publicity, and the trial as public entertainment.

"...this homicide account skillfully guides readers through the legal thickets."

"The most complete account of the Gorilla Man Strangler I have read. Flawlessly researched, and expertly told, this book is an exceptional work of historical storytelling."

Alvin A. J. Esau is a graduate of Regent College, the University of Alberta, and Harvard Law School. He was a professor at University of Manitoba’s Faculty of Law for more than three decades. Esau also held roles such as head of the University of Manitoba Legal Research Institute, Director of Graduate Legal Studies, Bencher of the Law Society of Manitoba, and Chancellor of the Diocese of Keewatin. His book, The Courts and the Colonies: The Litigation of Hutterite Church Disputes, was awarded the Margaret McWilliams Prize for best scholarly book on Manitoba history.

Alvin A. J. Esau lives in Victoria, British Columbia with his wife. They have four grown children.