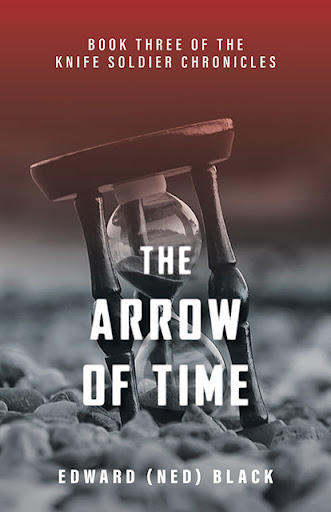 The Arrow of Time
by Edward (Ned) Black

What if Aliens invaded Earth and humans had forgotten how to fight?

The Arrow of Time is the third book of the Knife Soldiers trilogy. A fast moving, action-packed, military science fiction series following Frank Farrell, a former combat Marine, working law enforcement officer, and very reluctant time traveler, looking forward to his retirement from law enforcement. But on his way to work one morning, he somehow stepped into a physics entanglement experiment being conducted uptime. In that single beat of his heart, he was pulled 600 years into his future. Not only did he arrive out of his time, but inexplicably forty-years younger in body, while retaining all his stored memories of a lifetime.

Around the time of his arrival, an invading army from Andromeda turned-up in the edges of the galaxy and occupied one of the 100 inhabited worlds in the United Worlds of Earth Confederation.

After Frank disappeared from his home, a major World War began that ultimately killed well over two-thirds of the entire population of Earth, making the survivors dedicated pacifists. To help rebuild from that near extinction, humans developed a self-aware artificial intelligence known as the Main Computer Entity that has been a continuing influence, and guide, in the recovery of Earth and its growing confederation since then.

Upon scanning Franks's mind, the Computer Entity recommended he be placed in a small human military, becoming smaller as causalities mount.

Now, four-years later the war is over, and the invaders beaten. Frank is a Regimental Commander in the expanded UWE Marine Corps. who has been in almost constant contact with the Aliens the entire time. What Frank do with his life after the war?

The Main Computer Entity has a recommendation.

Edward (Ned) Black is a retired police officer from a large suburban department in Pennsylvania. He spent six years in the military and is a Marine combat veteran holder of two Purple Hearts. He is a graduate of Temple University in Philadelphia, the FBI National Academy in Quantico Virginia,

and he is a member of the Marine Corps Association, and the Company of Military Historians.

He is the author of; The Annals of Time; We Marines; Knife Soldiers, and Delta-Mike. He lives with his wife in rural Pennsylvania.

The Arrow of Time has been nominated by our staff as one of their favorite books.