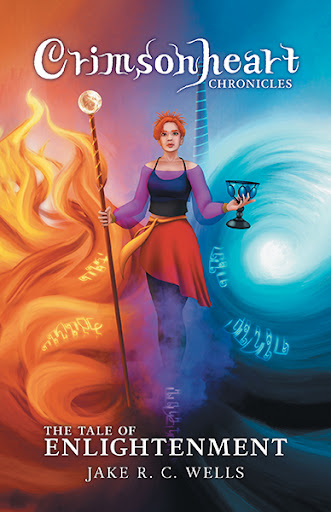 As the Endellion Emperor’s daughter, Althea Crimsonheart is expected to train in the ways of the enlightenment. Where Althea struggles in her training, her friend Jidan excels. To aid their training, Althea and Jidan’s mentor sends them on a journey to a wise sage rumoured to have achieved enlightenment.

Meanwhile, Endellion is at war with Ormilla, a neighbouring kingdom, while the spiròts shun their people. Meeting friends and foes along their journey, Althea and Jidan discover startling truths about the world they thought they knew.

When many forces collide, those caught between will be forced to make tough choices and learn how to steer the wheel of their own destiny.

Jake R.C. Wells is a lover of science fiction and fantasy, whether in the written word or in film, television and video games. This love, coupled with his career as a physics teacher, has encouraged Jake to create unique worlds with their own societies, languages and natural laws. The idea for the Crimsonheart Chronicles series came to Jake in a dream years ago. From there it has evolved to become the story it is today.

Jake lives in Newfoundland. Crimsonheart Chronicles: The Tale of Enlightenment is his first book.

Crimsonheart Chronicles: The Tale of Enlightenment has been nominated by our staff as one of their favorite books.