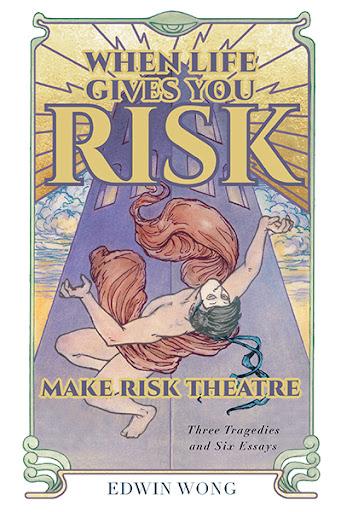 Defy the Smallness of the Stage

With the Greatness of Your Daring

Wong’s first book upended tragic literary theory by arguing that risk is the dramatic fulcrum of the action. It also launched an international playwriting competition (risktheatre.com). His second book expands on how chance directs the action, both on and off the stage.

Inside you will find three risk theatre tragedies by acclaimed playwrights: In Bloom (Gabriel Jason Dean), The Value (Nicholas Dunn), and Children of Combs and Watch Chains (Emily McClain). From the poppy fields of Afghanistan to the motel rooms and doctors’ offices lining interstate expressways, these plays—by simulating risk—will show you how theatre is a dress rehearsal for life.

Six risk theatre essays round off this volume. In a dazzling display from Aeschylus to Shakespeare, Thomas Hardy, and Arthur Miller, Wong reinterprets theatre through chance and probability theory. After risk theatre, you will never look at literature in the same way.

Edwin Wong (1974-) is a classicist and theatre researcher specializing in the impact of the highly improbable. He has been invited to talk at venues from the Kennedy Center and the University of Coimbra in Portugal to international conferences held by the National New Play Network, the Canadian Association of Theatre Research, the Society of Classical Studies, and the Classical Association of the Middle West and South. His first book, The Risk Theatre Model of Tragedy, is igniting an international arts movement. He was educated at Brown University and lives in Victoria, Canada. Follow him on melpomeneswork.com and Twitter @TheoryOfTragedy.