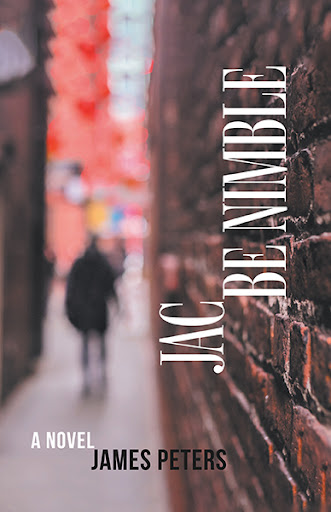 Jac Be Nimble
by James Peters

Jac Pencuri has been a busker, magician, and thief for most of his life. After growing up on the streets of Sydney, Australia, he’s made his way to Victoria, BC, living on his stolen tugboat, Scrimshaw. Jac performs regularly at the inner harbour with his apprentice, Chidi, and on the side, running cons and picking the pockets of rich tourists.

But his settled if somewhat shady existence is upended when an old patron-turned-nemesis, Australian billionaire Foster Roth, comes to Victoria in his magnificent mega-yacht Trio. Roth has come to the city to exhibit a collection of rare children’s books at Craigdarroch Castle, including a copy of Alice’s Adventures in Wonderland illustrated by Salvador Dalí and signed by the artist. Jac steals the frontispiece of the book out of its supposedly impregnable display case from under an array of cameras and the noses of security personnel—an apparently impossible crime.

When Roth brings in another old nemesis of Jac’s, retired police investigator Albert Vargas, to hunt down the thief, Jac finds himself on the run. He's trying to stay one step ahead of Roth, Vargas, and the Victoria Police, and sadly unable to properly pursue his unexpected attraction to the pretty au pair of a wealthy couple he intended to rob.

But magic is the art of misdirection. All is not as it appears, and more than one kind of sleight of hand is at play . . .

James Peters has been a non-fiction writer for many years. Inspired by a writing challenge to create a short opening based on the photo of a wallet lying on the ground—he set out to write his own story. He lives in Winnipeg, Manitoba. Jac be Nimble is his first novel and the first in a planned trilogy.

Jac Be Nimble has been nominated by our staff as one of their favorite books.