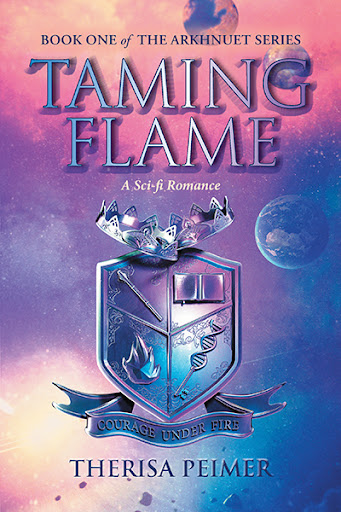 Flaminius’s days of bouncing between beds are snatched away the instant he sets eyes on his perfect genetic match, Aurelia. Suddenly, the tedious task of claiming his rightful place on the Arkhnuetian throne doesn’t seem as daunting with his whip-smart wife by his side. But it’s not like Aurelia had a choice; Flaminius is the only soul she can reproduce with, and she’s not about to play a role in her people’s extinction.

After a swift wedding and passionate honeymoon, an assassination attempt plummets the lovers back into the reality of ruling. Fueled by their indomitable matched hormones and fierce loyalty to each other, together they must evade his mother’s Machiavellian schemes, hunt down the mysterious cause of death plaguing the match making Keys, and protect their people from a violent supremacist cult, the Oradagra. But it turns out the greatest threat to their existence is something neither of them could have seen coming, and it’s a race against time to save the entire Arkhnuetian planet.

"Therisa Peimer is a one-of-a-kind storyteller who has combined deep, rich characters with wild wonderful world-building, a jaw-dropping premise, and a soupcon of saucy sassy sexiness to create a book where the pages seem to turn by themselves. You will laugh, you will cry, your blood will flow in highly provocative ways. But you will not stop until you reach the end."

Therisa is a romance novel enthusiast whose struggles with ADHD and dyslexia inspired her to kick off a writing career of her own. She attended a high school specializing in the arts, posed nude for artists and worked as a military nurse with the rank of corporal. She recently retired from a fifteen year career as a psychic medium. When Therisa is not writing, she enjoys reading, cooking, and spending time with her husband and two boys. She lives in British Columbia, Canada, with her husband.