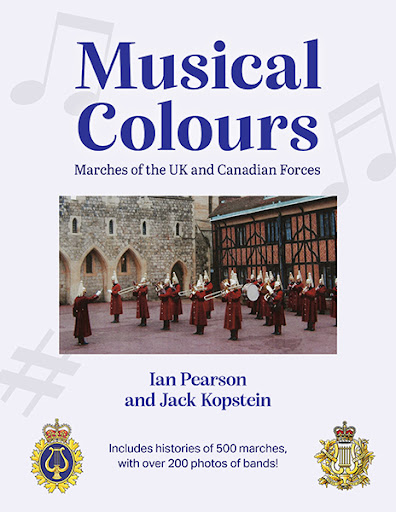 On the cover of the 1970 record THE VANISHING REGIMENTS, Colonel CH Jaeger OBE made an interesting observation: ‘Be it true or not that old soldiers never die but only fade away, it is absolutely certain that the music connected with soldiering never does in fact. Many famous Regiments in the last few years have passed off the scene, others have been amalgamated. Much of the music of former Regiments is still in use, though the names of the Regiments concerned have vanished, perhaps forever’.

Regimental colours are the symbolic spirit of the regiment; their marches are the musical spirit. Their histories are sometimes older than the regiments themselves and very much guarded and cherished by them. When you hear a regimental band play a march, why that march?

This book is an attempt to cover the fascinating histories of military marches, how and why regiments adopted them, even those that have faded into history. It will appeal to those interested in Regimental Marches of Canadian and United Kingdom Armed Forces. Over 500 marches are covered with many band photos from across the centuries. Also included are narratives of the composers, Victoria Cross musicians and even words to many marches.

So, get out the records, crank up the volume and listen to the bands play their MUSICAL COLOURS while reading all bout them.

Sergeant Ian Pearson was born in Regina, Saskatchewan and served in the Canadian Forces for 25 years. During his career is served with the Royal Canadian Regiment (London, ON) and in the Canadian Air Force as an Air Defense Technician. This took him to CFS Gander (NFLD), CFS Barrington (NS), 416 AW(F) Squadron (Chatham NB), Canadian NORAD Region (CFB North Bay ON) which included 21 and 51 AC&W Squadrons and Fighter Group HQ. While at North Bay he presented the Sergeants Mess with an original oil painting depicting Ft Lt Hornell winning his Victoria Cross. He also served at CF Recruiting Center in Toronto and flew AWACS in Geilenkirchen, Germany and Oklahoma (USA). In 1999 he retired as a Sergeant and resides in Oshawa, Ontario.

During his career he researched military bands and the military marches. His collection of over

military 2000 records/CDs and covers music from Canadian/UK/USA and European military bands. He has co-authored two military music books – The Heritage of Canadian Military Music and The History of the Queen’s Own Rifles Band and Bugles. He is a member of the Ontario Model Soldier Society, Royal Canadian Military Institute and the Company of Military Historians. In 2008 was made a member of the International Knightly Order of St. George.

35 years (including reserve time) and retired as a Chief Warrant Officer in 1988. He has written

several articles on military music and most recently produced the World Book of Military Music- (2020) He was awarded the Centennial and Queens jubilee medals.