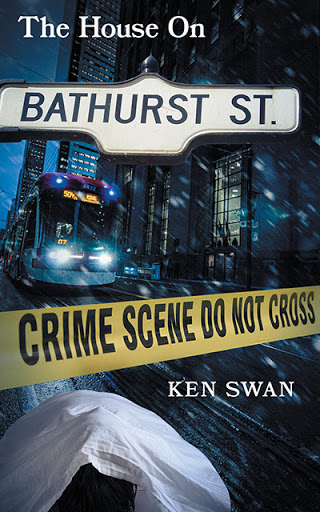 The House on Bathurst Street
by Ken Swan

For Detective Chief Inspector Cameron Salnicki, who has served with the Toronto Metropolitan Police Force for almost two decades, murder is something he often sees on the streets. But the murder of a young prostitute offers him something different when it seems to link to a suspicious group of young men from Jamaica living in crammed quarters in a house on Bathurst Street. Only it turns out that the “Jamaicans” are actually a terrorist sleeper cell from Somalia, and they are not the only group with nefarious plans. Soon Salnicki discovers there are also terrorist cells made up of Kenyans and Tunisians and that they might be supported by Russia and the Ukraine. With involvement from Mossad, M16, and CSIS, Salnicki and his team must sift through the ever-thickening plot to stop the terrorists before they act and Canadian lives are lost.

In Detective Chief Inspector Cameron Salnicki, author Ken Swan has created a memorable and likable, tough, tell-it-like-it-is character who also likes dancing, cooking, women, card games, and drinking gimlets. His distinctive way of looking at the world and his humour punch through The House on Bathurst Street, making this both an exciting police novel and an enjoyable read.

Ken Swan was raised in South Africa and Northern Rhodesia, where he eventually served as a police officer. Following that, he lived in England before finally settling in Canada in 1965. Ken lived in Toronto, where this book is set, from 1973 to 1996. Many of his friends there were Toronto police officers—a fact that adds to the flavour of the fictional police characters he creates.

Today Ken lives in White Rock, B.C. with his wife, Helene. He is also the author of Kwacha, a police novel based in what was then Rhodesia, and Dancing with Fate, based on his family’s experience in WWII.