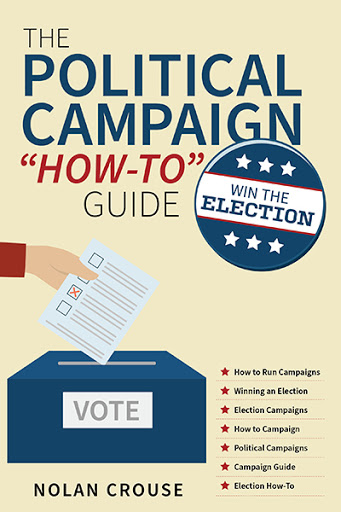 “I wasn’t lucky. I deserved it.” - Prime Minister Margaret Thatcher

The Political Campaign “How-to” Guide is a book that offers step-by-step guidelines on how to win an election as well as providing answers to questions a candidate may have about campaign planning. Whether running for Chief, mayor, reeve, councillor, MLA, MP or trustee in an indigenous, provincial, federal, municipal or school board election, this detailed book will provide candidates with the knowledge they need to run a successful campaign.

Nolan Crouse, MBA, CCMP(TM) served as councillor and mayor in Canada for 13 years. In this book, he shares the secrets to his success in winning four consecutive election campaigns. From making the initial decision to run for office, to putting together an effective campaign team and brand, to fundraising, door knocking, message delivery and advertising – all the way to election day and beyond – this book offers valuable tips, insights, knowledge and tactics that have been proven to be useful and effective.

Complete with checklists, great stories, images and examples, The Political Campaign “How-to” Guide is a must-read for anyone with an interest in running for public office for the first time or running for re-election in Canada. Most of the key principles also apply to all orders of elected office in the United States and many other democracies around the world.

Born in Alberta, Nolan Crouse spent much of his life as a business professional and sportsperson, working in the forest products industry and as a hockey coach. In some of his roles he was a general manager, league governor, committee chair, junior hockey franchise owner as well as a past recipient of the John Bates award for technical research from the Canadian Pulp and Paper Association. He received chemistry diploma from the Northern Alberta Institute of Technology and an MBA in Community Economic Development from Cape Breton University. He is also a Certified Change Management Professional.

After 30 years in business, he decided to run for office to give back to his community and went on to win four consecutive election campaigns, serving 13 years as councillor and mayor in an Alberta municipality. The Political Campaign “How-to” Guide is his first book in which he shares the knowledge and insights gained from his experiences to help others in their journey to elected office. Nolan lives in St. Albert, Alberta, Canada with his wife, Gwen. He has three adult children and five grandchildren.