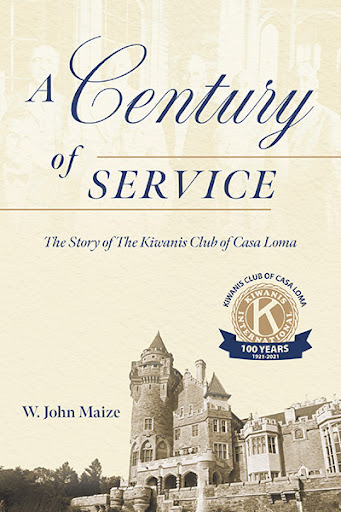 A Century of Service
The Story of The Kiwanis Club of Casa Loma
by W. John Maize

In 1933, the fate of Casa Loma, a once-proud edifice in the heart of Toronto, hung in the balance. Initially built as a private residence, the castle was languishing in the post-war depression, and the City of Toronto was prepared to accept tenders for its demolition. Enter the Kiwanis Club of West Toronto, a charitable organization with a vision of restoring the extraordinary structure to glory, operating it as a tourist attraction, and using the profits to fund their service work in the community. It was a vision that would be brought to fruition, though not without its fair share of challenges.

A Century of Service is the untold story of this remarkable club, whose services to the city of Toronto are extensive, including—but certainly not limited to—the incredible rescue of Casa Loma. One hundred years ago, The Kiwanis Club of Casa Loma, then the Kiwanis Club of West Toronto, ushered in a new era of community leadership and volunteerism. This book provides a behind-the-scenes look at the Club’s earliest days, serving underprivileged boys in partnership with the Y.M.C.A., through to Casa Loma’s heyday, hosting many fundraisers and charitable events. The Club is active to this day in various programs supporting kids and the community.

A profound study of Canadian history, architecture, and volunteerism, A Century of Service offers a revisiting of the past and a path forward for community service ventures worldwide.

The Kiwanis Club of Casa Loma is located in Toronto.