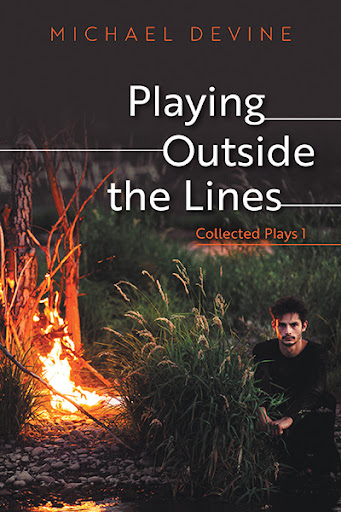 Playing Outside the Lines
Collected Plays 1
by Michael Devine

Playing Outside the Lines: Collected Plays 1 is a compilation of theatre plays created by intercultural theatre artist Michael Devine. Produced in different countries, Devine created each of the ten plays working as an outsider far from his own community and its conventions, making use of local languages, themes, and stories from each culture.

The goal of each play is not merely to hold a mirror up to nature but also to create a bridge between cultures. This is a fascinating collection that pushes the boundaries of what plays can be and is sure to challenge the expectations of readers and audience members alike.

The founder and executive director of the Centre for Alternative Theatre Training (CATT), Michael creates and supports intercultural theatre projects in different cultural communities in Canada, the US, Europe, the Middle East, and South Asia. As a playwright, Michael‘s work has been produced in Canada, Hungary, Serbia, Croatia, Romania, Ukraine, Finland, and Kosovo.

Classically trained as an actor in London (UK) at LAMDA and New York City at the HB Studio, Michael has a PhD in drama from the University of Toronto. His latest work, KONTAKT, premièred at the FLIPT Festival in Fara in Sabina, Italy, in July 2021. Playing Outside the Lines is the first of two volumes of his collected plays. These will be followed by BoxWhatBox: Acting for the 21st Century, to be published in 2022.