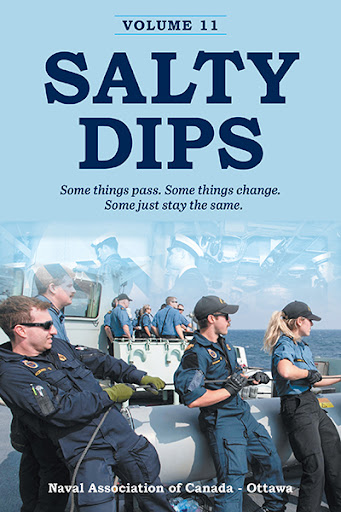 Among sailors, “to spin a dip” means “to tell a story.” The Naval Association of Canada - Ottawa Branch's Salty Dips series carries on this tradition by collecting entertaining and informative stories about the Canadian Navy as it is remembered by those who have served in its ranks.

As they began conceiving this eleventh volume of the Salty Dips series, the authors agreed that the Navy from which they retired was different from the Navy that they joined. Thus, this volume charts the social changes in the Royal Canadian Navy and Canadian Navy since the 1950s; in doing so, Some things pass. Some things change. Some just stay the same. brings the past a bit closer to the present by reminding us of the journey that brought us here.

This compendium of stories, musings, recollections, and observations gets to the heart of what it means to serve one’s country and spend one’s life at sea. These “Old Salts” tell some incredible tales, admit to humorous pranks, and catalogue important historical moments from a personal perspective, including reminiscences of the first female officers to serve at sea in the Canadian Navy. This collection of voices affords us a sense of the textures and nuances of Navy life, covering everything from shaving mishaps to life-changing calls to duty. Whether you are a seasoned mariner or taking your first dip into naval history, this collection promises to entertain, educate, and inspire.

The Salty Dips Committee of the Naval Association of Canada - Ottawa Branch has published eleven volumes on the history of the Royal Canadian Navy and the Canadian Navy. The first volume, When We Were Young and in Our Prime, was published in 1983. Since then, the Salty Dips committee has catalogued the Navy’s peacekeeping and humanitarian operations, its role in modern wars, and the memories of those who have chosen to serve their country through a life at sea.