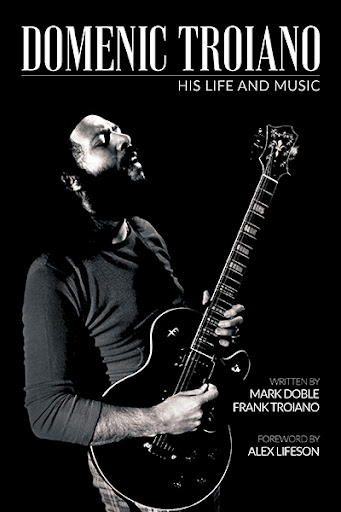 Rock guitarist, composer, producer, and musical mentor: Domenic Troiano was one of the greatest Canadian musicians of his generation. Starting out in the 1960s Toronto club scene with Robbie Lane & the Disciples and Rompin’ Ronnie Hawkins, Domenic made his musical mark with the Five Rogues, the Mandala, Bush, the James Gang, and the Guess Who. Along the way, he would share the stage with legends like Eric Clapton, David Foster and Carlos Santana. What remained constant was Domenic’s desire to be the best that he could be: a guitarist extraordinaire, an accomplished composer and arranger, a musical explorer on a never-ending quest.

Domenic Troiano – His Life and Music, captures his career and character, from his youth to his final days and his legacy. Featuring submissions from more than 180 colleagues, friends, family and fans, Mark Doble and Frank Troiano have thoroughly chronicled Domenic’s musical adventures as well as the profound influence he had on those he encountered throughout his career.

With a foreword by fellow guitarist Alex Lifeson of Rush and a complete listing of Domenic’s discography and television film credits, Domenic Troiano – His Life and Music is an authoritative and comprehensive account—an essential reference for anyone interested in him and his work.

Mark Doble has a Bachelor of Music from McMaster University, and has written for fan magazines, websites and blogs about Canadian music, with a particular focus on the Guess Who. It was as a fan of the Guess Who that Mark first encountered Domenic in the mid-1970s, later meeting and befriending him in the mid-1990s. Mark lives with his wife Terry in Lindsay, Ontario.

Frank Troiano worked with his older brother Domenic as a road manager in the 1970s and ’80s, and the two brothers remained close throughout their lives. Since Domenic’s passing in 2005, Frank has promoted numerous tributes, scholarships, and memorials in his brother's honour. Frank lives with his wife Rita in Richmond Hill, Ontario.