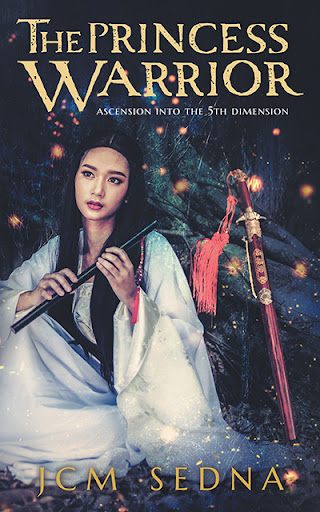 The Princess Warrior
Ascension Into The 5th Dimension
by JCM Sedna

“Simplicity is thought in its purest form,” she whispers. Eyes closed, breath steady, she waits in the darkness of night high in the Wudang Mountains of China waiting for the souls of the Wise Ones to float down from the cosmos.

The Princess Warrior, Master of Universal Law, born with a life purpose to teach, inspire, and protect the Wise Ones, their mission is to raise the vibration of the collective on earth. These twenty-two wise souls take human form while embarking on this journey to teach universal consciousness unconditional love. The Princess Warrior guides these young knowledge seekers on a quest that is mystical, magical, and at times challenging.

The Wise Ones will become enlightened beings and skilled warriors of peace as their mentor instills teachings from higher realms and universal training of mind, body and soul. But it will only happen if she can succeed in teaching and protecting the Wise Ones long enough for them to take their places here on earth to fulfill their destinies.

JCM Sedna was born in Ontario, Canada, and began writing stories when she was only eight years old. After graduating with a degree in journalism, she embarked on an alternative path and spent thirty-five years in policing-support field. In 2016 she was the recipient of the Ontario Provincial Police Accolade Award for Valuing and Supporting People, as recognition for her work establishing an organizational team with the objective of creating a Child/Youth Advocacy Centre in Ontario’s Southwest Region.

Recently retiring, Sedna decided to pursue her passions of writing, photography and public speaking. Sedna lives in Leamington, Ontario, with her twin daughters Lauren and Lea, and their fat cat Izzie.