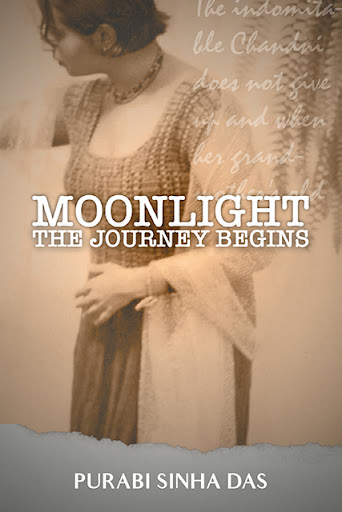 When Chandni Rai turned thirteen, two things happened to change the course of her entire life. Her father died suddenly. And, she discovered a clue to the mystery of her missing grandmother who had been a child-bride - a piece of paper stuck behind an old photograph.

Her grandmother’s name is never mentioned in the family, the townspeople spread malignant rumours. Chandni at nineteen is determined to unearth the truth and re-instate honour into her family’s name. After her marriage to the handsome TJ, she must prepare to leave for Manchester, England but is determined to see her mother one more time and flouting social norms travels alone by train when it is attacked by robbers; she undertakes a feat of remarkable daring by pretending to be dead leading to the turning point in her life.… "With a booted foot one of them turned her over…her hackles rose…how dare he? Later, looking back at the events of that day, Chandni would wonder why she had been spared."

The indomitable Chandni does not give up and when her grandmother’s old retainer appears on the horizon, it is as if fate decides to lend a hand in the next phase of Chandni’s life. She listens spellbound to the poignant love story of the ill-fated Prince Kunjan and the hauntingly beautiful Kantabali. Her grandparents had appeared to her on purpose. It was up to her to find out why.

Chandni will cross continents to join her husband where things are not as she had imagined; she must make yet another choice after the birth of their son. Facing insurmountable odds can she fight her way out of an abusive relationship and return to India with her son where society is sure to reject her? Can the warrior in Chandni rise to fulfill her grandmother’s vision?

Spanning a period between early to mid-twentieth century, and moving from eastern to central India then to Manchester, England, Moonlight - The Journey Begins explores the complexities of life, Christian missionary influence on colonial India, the love for one's family that is willing to forgive them for their mistakes, to learn from ancestors.

"From the moment I read the first page I was pulled into Chandni and Kanta’s worlds...characters woven so intricately together, leaving the reader in anticipation of the next puzzle piece…shift between space and time so beautifully crafted. I couldn’t put the book down...a must read!"

—Nina Ganguli, Certified Life Coach, Author of Confessions of a Can’t-aholic: How to go from “I Can’t” to “I CAN”!

"Purabi Sinha Das elegantly describes the struggles of two generations of women through the lens of a patriarchal Indian culture. The reader will be absorbed with Chandni Rai’s journey as she peels back layers of family secrets to find her missing grandmother...finding the strength to cope with her own...reality. A complex and moving story."

"...two points in time... two lives that intersect...the two people never meet. We are drenched in the culture...climate...norms...women have lived through...continue to live through today. Purabi never lets us dwell on the characters' big decisions...life changing moments...instead moving us...facing forward. Every time I put the book down the characters stayed with me until I picked it up again."

Purabi Sinha Das originally from India now settled in Canada writes literary fiction, poetry and personal essays. Her short stories and poems published in literary journal and community newspaper are inspired by her travels, life in general and growing years in a small town in Bihar now Jharkhand. To bring joy and comfort to readers through the written word is Purabi's vocation. Moonlight – The Journey Begins is her first novel. Purabi has a BA in English literature from Ranchi University, India.

You may also wish to check out What Will It Be This Time, a book of personal essays by Purabi Sinha Das and available on Amazon.