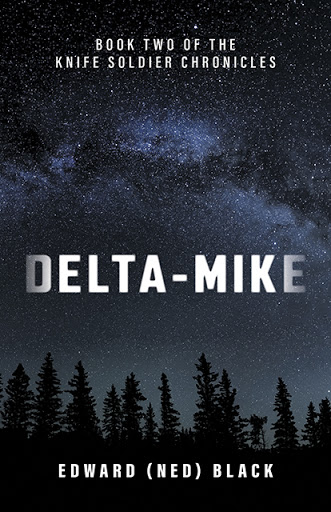 What if Aliens invaded and humankind had forgotten how to fight?

Delta-Mike is military science fiction. It is book two of the Knife Soldier chronicles following Frank Farrell, a twentieth and twenty first century police officer that is a reluctant time traveler. He is marooned six hundred years in his future by a botched physics experiment up-time. He arrived not only out of his time, but mysteriously forty years younger, and at the same time as an alien invasion of the United Worlds of Earth. The deeply pacifist union of One hundred human worlds around the galaxy in a situation Frank quickly realized they are unready to cope with or expel the invaders. Frank's origin is a guarded secret by the UWE galactic government and he finds himself enlisted n the galactic marines.

Now, over two years into the war that has spanned seven worlds so far, Frank is a battalion commander still trying to destroy Delta-Mike any way he can. He now faces some of the most vicious fighting to date in his effort to save humanity.

Edward (Ned) Black, is a retired police officer from a large suburban department in metropolitan Philadelphia. He is a Marine Corps veteran with six years of service, and holder of two Purple Heart medals. He is a graduate of Temple University in Philadelphia, the FBI National Academy in Quantico Virginia, and is a member of the Marine Corps Association, and The Company of Military Historians.

He is the author of "The Annals of Time," "We Marines," and "Knife Soldiers." He lives with his wife in Rural Pennsylvania, and writes to keep busy.