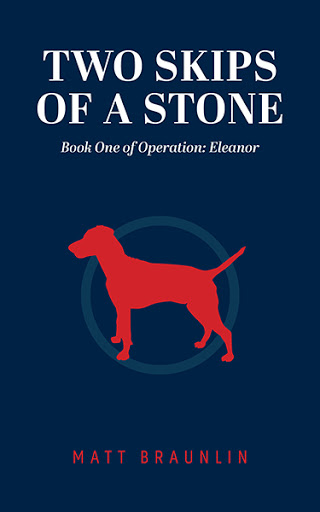 Two Skips of a Stone
by Matt Braunlin

After reluctantly accepting a somewhat mysterious job to be a “history teacher” in Kenya, 33-year-old Jason Roberts finds himself working for a secretive organization and on the receiving end of life-changing information: Humanity will be wiped out in less than a century. The source of this information is a Time Traveller from 2102, who reached back in time as far as their technology allowed—just eighty-five years. The only hope for changing this apocalyptic future offered by the Time Traveller is if World War Two can be prevented. But to do this, a second Time Traveller must complete a jump back to 1935 to compel the British government to take pre-emptive action against Nazi Germany.

When Jason is told he has been chosen for the mission, he struggles with the overwhelming responsibility, the consequences of what saying no might mean, and his own doubts that he is the best man for the job. As Jason receives intensive mission training and tries to come to grips with the ethics of what he is being asked to do, he finds his strained sanity strangely dependent on his video chats with his best friend back home—an eccentric, zen-filled, weed-smoking, self-proclaimed hippy chick named Markie. Yet even with her support, Jason finds himself wondering if he will have what it takes to pull the trigger on the time machine.

The first book of the “Operation: Eleanor” trilogy, Two Skips of a Stone, is a fast-paced, character-driven novel that will both thrill and entertain, asking what you would do if duty called.

Matthew Braunlin is an Anglophile, a lover of drama, and a passionate amateur student of World War Two history. Two Skips of a Stone sprang from a simple fantasy of meeting Winston Churchill, but as the plot developed, it became clear this story needed three books to be fully told. He explores how a spirit of love and reconciliation can heal the wounds afflicting our world.

Matthew lives in Port Colborne with his cat Penny. He is already hard at work on the second book in the Operation Eleanor trilogy.