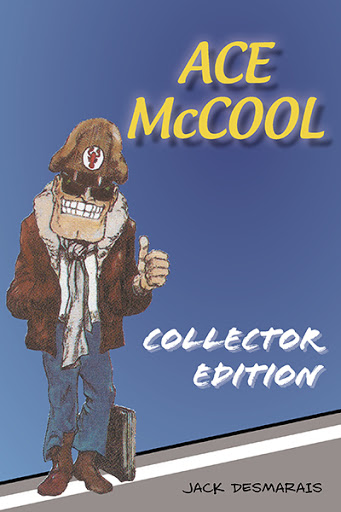 Ace McCool is an over-the-top spoof of the airline industry. It relates the hilarious misadventures of a fly-by-night, corner-cutting airline called Down East International, based in Moncton, New Brunswick.

The stories start with Ace McCool, a World War II pilot, and the rag-tag characters he picks up along the way as his airline progresses from DC-3s to a Boeing 727 over the years from just after the war to 1985.

Dim-witted pilot Pete Braddock "who could have flown the crate the airplane came in."

The Smarts, an insufferable Englishman but "a polemaster of the first water."

Cowboy McCloskey, a big Albertan dinosaur with oil wells on his ranch. He commutes to Moncton in a privately-owned CF-104.

Red Starr, a hippie pilot and, on the side, lead of a rock group called Red Starr and the Commies.

Those pilots and a few more, as well as stewardesses (as they were called) Mile-High Millie, Crazy Iris and Stew Jane, and a few other characters stumble their way from one impossible situation to another.

These are the same stories that brought laughter to readers of Canadian Aviation magazine. They are assembled together in book form. Come fly and laugh with Ace McCool of Down East International.

Jack Desmarais was born in Montreal, QC in 1934. He first flew with the Royal Canadian Air Force then was an airline pilot for 37 years.

He was air transport editor of Canadian Aviation magazine for 20 years, writing about routes and equipment, regulatory affairs and airline economics.

Desmarais started a humor column in Pilot magazine, writing half a dozen stories about Wheeler Deiler, a corner-cutting, devil-may-care Maritime pilot. This evolved into Ace McCool, which was also expected to be a half-dozen stories. The column ran monthly for 14 1/2 years in Canadian Aviation,

Jack Desmarais is retired and lives in Toronto, ON with his wife Joanna, herself a writer. They winter on Anna Maria Island, FL.