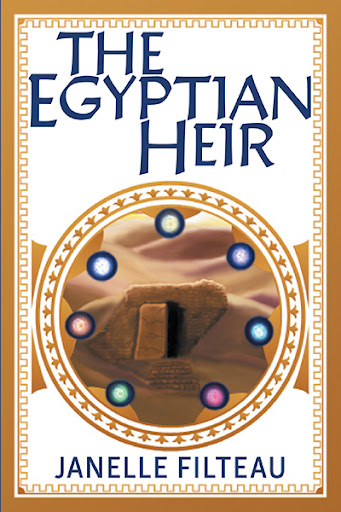 The Egyptian Heir
by Janelle Filteau

Whoever enters this tomb, and is not heir to the diamonds, will surely die. When the heir is revealed, they will be able to control the diamonds as they wish.

The story of the Pharaoh Obeko and the wish-granting diamonds he left behind enraptured Cassandra Waters as a child. When her grandfather told her the tale, she bustled with excitement and questions, asking him if the heir ever emerged. “Not yet,” he replied, “but someday, they will.”

Now a teenager, Cassy has other concerns than bedtime stories about pharaohs. The tragic death of her parents forces her and her brothers to move to Saskatoon and live under the guardianship of their estranged eldest brother Michael. Already struggling with mourning and getting along with Michael, Cassy also has to face bullying at her new school at the hands of Zackary Exacil, who, for some reason, can’t seem to leave Cassy alone.

The story of the Egyptian Heir, however, is more relevant to Cassy’s life than she knew. Targeted by a murderous group of men who believe she is the heir and want the power of Obeko’s diamonds for themselves, Cassy finds herself on a life-threatening voyage that spans from the streets of Saskatoon to across the globe. Her only allies? Her once-tormentor Zack, and a mysterious organization called the FUA.

The first entry in a trilogy, The Egyptian Heir combines gripping thrills and chilling villains with a tender romance and reflections on family, and will delight readers young adult and older.

Janelle Filteau is a Saskatchewan author. She began writing at 13 to improve her reading and writing skills, and fell in love with it, leading to a passion that continues to this day. The Egyptian Heir is her first novel.

She lives with her husband, new baby, and their beloved assortment of pets, which includes dogs, cats, and reptiles.