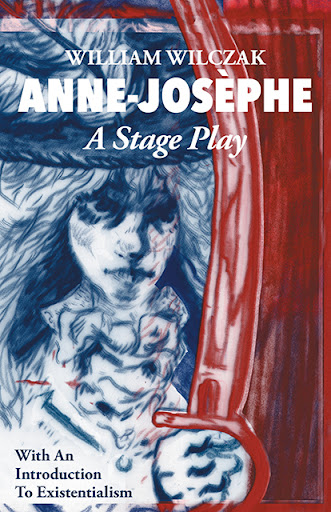 Anne-Josèphe: A Stage Play brings to life the historic Anne-Josèphe Théroigne de Méricourt, a commonly overlooked revolutionary who fought for liberty and equality for women during the French Revolution. Bold and passionate about effecting change, Anne-Josèphe dons men’s clothes, arms herself, and trains French women as Amazones. She encounters many key players in the French Revolution – such as Abbé Sieyès, Marquis de Condorcet, Madame Roland, Claire Lacombe, and Marat – yet she also draws the attention of a vicious and chauvinistic press. As blood spills between rival factions over the governance and future of France, Anne-Josèphe finds her own freedom – and mental health – slipping away.

Anne-Josèphe is an epic tragedy written with an existential lens and includes an introduction to Existentialism to attune readers to this philosophy. Historical and dramatic, reasoned and emotional, this play represents our past, present, and possibly our future if we don’t face our existing struggles and overall spiritlessness in our age.

For the free audiobook recording of Introduction To Existentialism, follow the Existential Will podcast.

Wilczak was born in Rome, travelled throughout Europe with his parents as a child, and they eventually moved to British Columbia, where he lives today. Intent at first on pursuing business at the University of Victoria, he found his true calling as he studied philosophy and film. Gradually drawn to Existentialism through films and Dostoevsky, he committed to reading the works of the main existentialists from Kierkegaard and Nietzsche to Beauvoir and Sartre.

He notes, “I encountered AnneJosèphe in a video game of all places. Personally, I was drawn to her adventuring and empowered persona as she became involved in the revolution and I felt I could write something centred on her. I applied my existential interests to her story and I believe it was a natural fit. I find her journey significant to our own time as people are struggling, more and more - within even their own households - to assert their freedom.” Anne-Josèphe is Wilczak’s first published play.