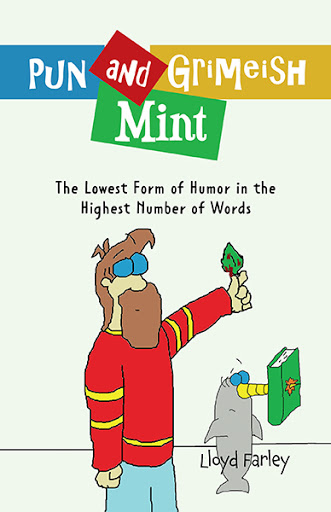 "Pun And Grimeish Mint" is a humour book, filled with a number of long-form puns (5-6 sentences each, very roughly), playing off of pop-culture references, common idioms, and the like.. As far as a target audience, given that it is a pun book it is best enjoyed by those with a good understanding of the English language, I’d say ages 12 and up. There are a few puns that skew generationally (just because I’m totally jiggy to the max, yo), but overall still relatable to anyone. As it is a collection there is no overall theme - you might say there themes to be nothing on that front. The “hook” - I believe this is a highly unique project, a collection of puns that, to the best of my knowledge, have been dreamed up and recorded by me, myself, and I alone.

“I didn’t even have to Force myself through it.”

“I laughed my head off.”

“Up and away the most entertaining book I’ve ever read”

“Surely this is one of the greatest books of all time. And don’t call me Shirley.”

Lloyd Farley, born and raised in Calgary, Alberta, Canada, is a newcomer to the publishing world. Devastatingly handsome, an intellect well beyond genius and remarkably humble, Lloyd knew from an early age that his passion was bringing joy to all. Many roadblocks attempted to hinder his goal of making people smile - a childhood listening to country music, a multi-year career shoveling coal into the eternal pits of hell (or an oil and gas service desk job, but whatevs), a failed marriage to a rutabaga named Ethel, John Mellencamp - but Lloyd could not be stopped. Drawing comics, doing impersonations, reciting Monty Python and some stand-up comedy ventures were just a few bullets in his arsenal of laughs. Puns, though, were, and are, his bread and butter. This book collects his best worst jokes in his constant pursuit of sharing joy. And his eventual takeover of the world.