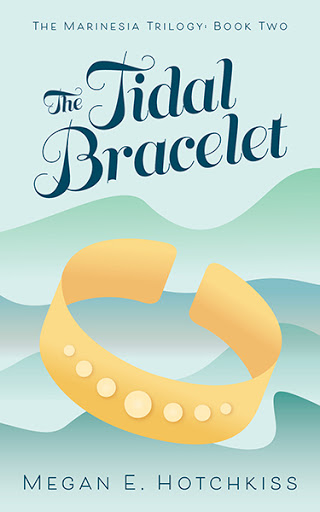 No one was more surprised than 11-year-old Kaileigh Noble, when the vivid imaginings that she dreamt up to compensate for her lifelong blindness, suddenly became frighteningly real. But after stumbling upon the Seadrop Pendant, one of three magical Artifacts, Kaileigh, her older sister, Taryn, and her new neighbour, Malcolm McKenna, were chased by the vicious Drakken into a parallel underwater world called Marinesia. There, they managed to hide the Pendant safely away in the Cave of Desolation, thus completing the first step in their destiny to repair the weakening Barrier between Marinesia and Earth, and separate the two worlds forever.

That was one month ago. Now back home in Peggy’s Cove, Nova Scotia, their search for the two remaining Artifacts is interrupted when the girls’ Aunt Sisi arrives for a surprise visit – and then disappears just as suddenly. And when Kaileigh accidentally switches her aunt’s laptop, she discovers a file on a children’s book that Aunt Sisi was writing – about a magical underwater world identical to Marinesia! Furthermore, she may know the location of the second Artifact, the Tidal Bracelet!

Could Aunt Sisi have been to Marinesia herself? All Kaileigh knows for sure is that, with the help of Taryn, Malcolm, and their mermaid friends Sandy and Pike, she has to fi nd Aunt Sisi, and the Tidal Bracelet, fast! Because the evil serpent Leviathan and his vicious Drakken will stop at nothing to get the Bracelet first, which means that Aunt Sisi’s life, as well as the fate of two worlds, could be in grave danger...

Book Two in The Marinesia Trilogy, The Tidal Bracelet is a breathtaking and action-packed tale about making the most of your abilities, and learning to really trust what’s on the inside.

Megan E. Hotchkiss has been telling stories since she first learned how to talk, and writing them since she was old enough to hold a pencil. Born with a rare congenital birth defect, she began making up fantasy worlds such as Marinesia as an escape from the chronic pain and discomfort

of multiple surgeries and hospital visits. She is also the author of The Seadrop Pendant, the first book in The Marinesia Trilogy. Megan lives in Kingston, Ontario, Canada, with her two cats.