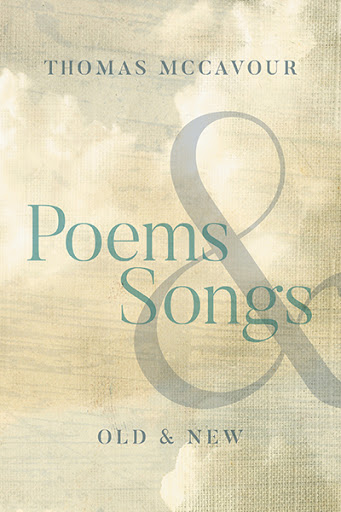 Poems & Songs Old & New is a collection of 120 songs and 55 poems by a writer that clearly adores them. There is a lot of love in the reproduction of so many songs and poems that people remember and appreciate, including such classic songs as, "Bohemian Rhapsody," "Hey Jude," "Hotel California," "November Rain," Let It Be," "Beer Barrel Polka." "Sounds of Silence," "You Are My Sunshine," "Mama Mia," "Ramblin Rose," " Yellow Bird," "Goodnight Irene," "You Are My Sunshine" and "Satisfaction." A brief biography of some of the famous singers , who sang the songs, such as Frank Sinatra, Perry Como, Nelson Eddy and Jeanette MacDonald is also included. The collection of poems includes "In Flanders Fields" by John McRae, "The Raven" by Edgar Allen Poe, "A Girl" by Ezra Pound and "Daffodils" by William Wordsworth. McCavour also includes some of his own poems, including "A Friend of Ours," which was first published when he was only fourteen years old.

Thomas McCavour is a Canadian novelist, poet and play writer with a background in engineering, construction and gardening. McCavour has written dozens of short stories and thirteen novels. He is well known for his lectures on both engineering and gardening subjects. Recent motivational lectures include, "So You Want to Write Your Memoirs", "Therapeutic Gardening for Zoomers" and "What To Do With Your Life, Before You Kick the Bucket."