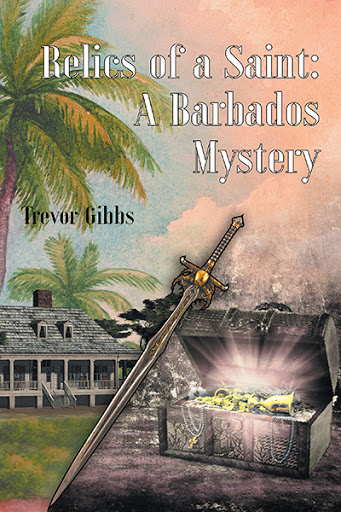 Relics of a Saint
A Barbados Mystery
by Trevor Gibbs

Recently divorced, Dan is still fit and handsome and some might even describe him as having a roguish smile. But after a worrisome medical checkup, and learning that the beloved heritage house he once owned has met the wrecking ball, it feels like time for a change. He has to face up to the fact that he’s a rather lost and lonely divorced guy.

So when his Aunt Mary calls to tell him there’s a family mystery she needs help solving, Dan gladly leaves behind chilly Vancouver for the sultry shores of Barbados where he grew up. And soon, with the help of family, friends, and a slightly annoying local historian, he embarks on a treasure hunt. Journeying into his family history takes him through the lush tropical paradise of Barbados, to the hushed archives of Charleston, South Carolina, and to the evergreen Gulf Islands off the west coast of Canada. But Dan and his family aren’t alone in this adventure. They soon find themselves in competition for the treasure with mysterious rivals … who seem willing to stop at nothing to gain it.

This meticulously researched adventure plumbs the history of sugar, slavery, and indentured servitude on Barbados sugar plantations to track a mystery down through the generations. A whirlwind tour through beautiful Barbados’s many attractions, Relics of a Saint builds conflicts, crises, romantic dalliances, and surprises that lead the hero on a journey into the past … and into his own psyche.

Trevor Gibbs is a semi-retired banker, stock broker, and venture capitalist, who was born on the island of Barbados into a family that settled there in the early 1600s. He spent his early life in Barbados, his later life in West Vancouver, British Columbia, and has travelled widely. He is familiar with all the locales of the novel as well as with Barbados history, British colonial history, and the famous Treasures of St. Cuthbert—all key elements in Relics of a Saint. Trevor has a particular interest in the current debate on slave reparations in the Caribbean, something he also addresses in the novel.

He is an avowed environmentalist and has founded startup ventures in green energy and food distribution. He is especially interested in projects dealing with climate change, another theme of Relics of a Saint. Trevor lives with his wife in Aurora, Ontario.