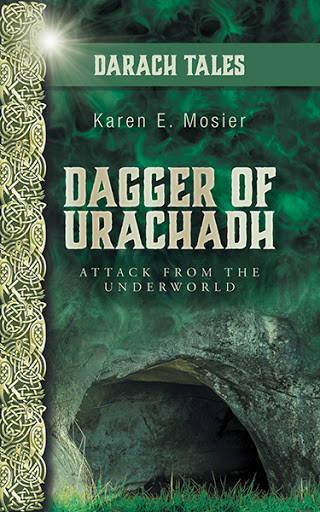 Dagger of Urachadh
Attack from the Underworld
by Karen E. Mosier

Faster than a wink of an eye I pray,

To the land where the Darach roam,

To the land of the magical stones,

To the Peoples of the mountain,

Great Everything bring me thither.”

A young Saskatchewan girl named Golden, who has a strange birthmark on her arm, finds a magical amulet and a strange incantation in her recently deceased grandfather’s study. As a result, she is magically transported back in time into a fantastical alternate version of Saskatchewan in the 1500s. After a long trek across the prairies, Golden is rescued by a kind young Celtic boy, Button. She learns that the Darach tribe, which has five clans (Mountain, Forest, Bog, Hill and River), is facing a deadly attack from the forces of darkness at Samhain, when the veil between the earth and the underworld is the thinnest. This onslaught started after the evil and greedy Randahar from the Mountain Clan knowingly disturbed a portal to the underworld. The Mountain clan is hated and persecuted as a result - and Golden's mysterious birthmark turns out to actually be the mark of the Mountain Clan!

After Golden confides in Button that she is from a different time, they set out together to find the Ancient Wizard whom they hope can help her return home. During their journey, a benevolent god visits Golden and tells her she needs to find the Dagger of Urachadh, which will guarantee victory against the evil marauders if wielded by the Great Protector. With the help of Button and his two friends, Naed the Wise and Robert the Historian, and some magical stones, Golden has everything that she needs to set out on her quest.

Ancient Celtic legends come alive as the gods often take animal or human form and show up in the most unexpected places. Follow the many adventures of these four youngsters as they struggle to find the Dagger of Urachadh and to bring the holy relic to the final battle at Battle Creek amid constant dangers from mischievous beings to deadly mythological creatures to powerful evil gods.

This beautifully illustrated book, rich in Celtic tradition and mythology, will appeal to readers of all ages. The Dagger of Urachadh: Attack from the Underworld is a story about persevering through persecution, poverty, age discrimination and gender inequality, and finding true friendship. It is a classic tale about the conflict between good and evil and emphasizes that anyone regardless of age or gender or social status can do their part to make the world a better place to live. 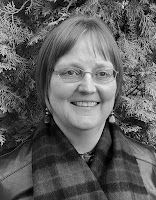 Karen is the author of the self-help book Soft Skills and Professional Tips for the Office (see karenemosier.com). Over the years she has developed an intense love for writing. Since she was a young girl, Karen has always been an avid reader. She also loves gardening, travelling, hiking and being outdoors. Darach of Urachadh – Attack from the Underworld is her first fiction book.