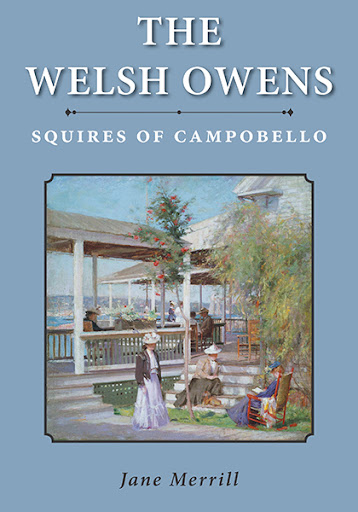 The Welsh Owens
Squires of Campobello
by Jane Merrill

In an age when the political institutions of Europe and America were already democratizing, the owners of a huge parcel of land in North America went the other way, to feudalism. This book is an original study of the patricians who directed the history of gorgeous Campobello Island. A unique governance underpinned the Owens until their power strained and broke.

Three Tory aristocrats from Wales – a father, his son, and between them the father’s nephew – exercised rule over Campobello Island from 1767 to 1857. They were called Principal Proprietors. Theirs was a fractious family that patterned a rule by landlord which they endeavored impose on North American soil.

The first Welsh squire, Captain William Owen, a swashbuckling adventurer, received the grant of the 24-square-mile “Outer Island” as a reward for his heroism in the Royal Navy. A restless person, he returned to the Navy at 60 to fight the French in India. The second, a distrustful snob, who took Cambridge University’s highest mathematical prize was David Owen. A friend in London, General Benedict Arnold, convinced him to go to Canada and claim the Island. The third Welsh squire of Campobello, Admiral Fitzwilliam Owen, had an illustrious career as a surveyor for the Empire. He was a great abolitionist who led sting operations against slave traders on the African coasts and created a British colony in Mombasa which he governed as a protectorate not to profit from trade but from which to hunt slavers and free slaves. On Campobello he was popular but autocratic and took a particular interest in the young ladies.

The story thread continues with the island being acquired by an American company that sold parcels to rusticators like the Roosevelt family. Franklin Delano Roosevelt summered on the Island for three decades and left an indelible mark on its culture.

Jane Merrill has published in 50 national magazines and has written books on popular culture, fashion, and 18th-century individuals. She lives in Saint George, Maine and on Campobello Island.