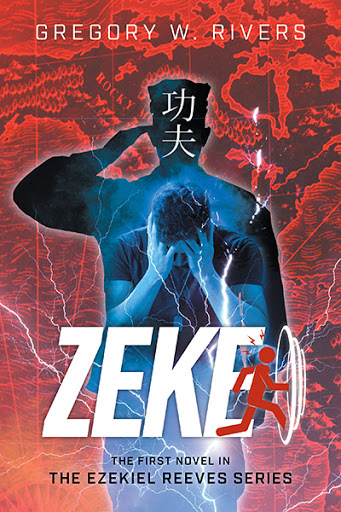 Zeke
The First Novel in the Ezekiel Reeves Series
by Gregory W. Rivers

As a young boy, Ezekiel Reeves suffers a traumatic brain injury. When he learns that he has the ability to move through time and space, he begins his training in Gai Ai I Gow, an ancient Chinese martial art. A decade later, after the death of his teacher, Zeke joins the military. But when he’s arrested at a routine traffic stop on the way to his new posting, he risks being declared AWOL. His call to rectify the situation makes everything worse when Zeke inadvertently describes coded information that triggers an Imminent Nuclear Attack protocol. Zeke comes under the spotlight of the upper echelons of both the U.S. and Canadian military, on the run, with no idea who to trust.

Why are the military so interested in Zeke? What is the origin of his mysterious power, and why didn't his father explain it to him? Everything seems to tie back to events in his past, and Zeke will have to risk it all to learn the truth.

Gregory W. Rivers has published both poems and short stories. A huge fan of books like Jack Reacher and the works of John Grisham, his deep personal connection to the material in Zeke: The First Novel in the Ezekiel Reeves Series comes from his own history. He is trained in Gai Ai I Gow, was an instructor of Kung-Fu, and a student of Tae Kwon Do. He is currently working on the second and third books in the Ezekiel Reeves series, with further books planned.