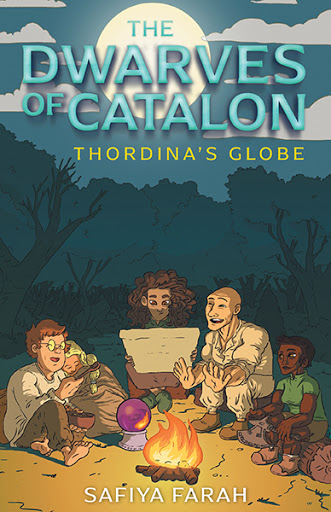 The Dwarves of Catalon
Thordina's Globe
by Safiya Farah

A snowstorm at the height of summer? Has the weather gone crazy?

It appears it has—and the Everyman Dwarves of the Bailliwick of Catalon know who’s to blame: the Human, Omnivor who rules the Erdeklein Alliance, a group of six countries called Bailliwicks and whose smelter is spewing out pollution that’s changing the climate. However, when a dwarf discovers Thordina’s Globe, inhabited by the spirit of Catalon’s founder, Erla and her four young friends learn there’s a way to set their world right: they must find the five Hands of Tempora, powerful magical artifacts that can turn time back to when their land was unpolluted.

Calling themselves the Coalition of Five, the friends set off in an open-top, solar-powered, centuries-old charabanc on an adventurous journey that tests their endurance, their resolve, and their friendship. Along the way, they’re stranded in the Grey Granite Hills, nearly drowned by an agent of Omnivor’s, confronted by two brutish half-Orcs, imprisoned by Omnivor’s mutant Dragonbred, and almost burned alive. They also encounter unexpected allies who help them in their quest just when help is needed most.

Only by working together can they save their precious Bailliwick of Catalon from Omnivor’s climate-changing pollution—and even if they succeed in destroying his smelter and finding the first of the Hands of Tempora, it’s only the beginning of their task as a series of thought-provoking adventures lie ahead in which the dwarves face all kinds of threats, unknown problems and unimaginable disasters…

Safiya Farah wrote her first story at the age of nine. Born in San Luis Obispo, California, she grew up in Sacramento, and studied Human Nutrition at Kansas State University, where she now works professionally in her chosen field. However, she never lost her love of writing, especially in the fantasy genre. Recent events, coupled with personal experience, caused her to write The Dwarves of Catalon, which she’s been working on for years, the story transforming with her as she ages. Inspired by a loved one, she hopes the series will portray the value of life, the values we share with others, and now, more than ever, the value of the world in which we live.