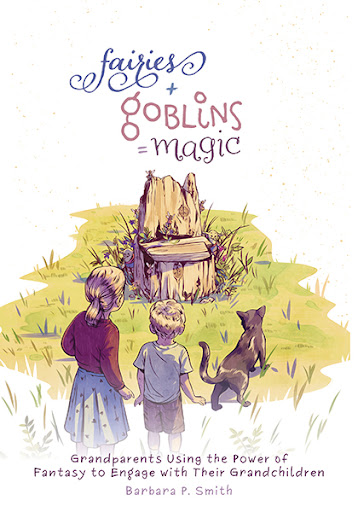 Fairies + Goblins = Magic
Grandparents Using the Power of Fantasy to Engage with Their Grandchildren
by Barbara P. Smith

In an era of rapidly growing technology, there is a concern that the power and importance of fantasy and magic may be lost. But when Barbara’s two pre-school grandchildren first arrived at the family’s summer cottage, they discovered an old stump in the garden and quickly named it “The Fairy Chair.” The result was that a magical communication was born which lasted throughout their childhood and created memories for a lifetime. FAIRIES + GOBLINS = MAGIC provides a charming template for grandparents, or any loving relative to enchant, emotionally support, entertain, and educate children through magical communication with the fairies and the goblins.

From examples of Barbara Smith’s own “fairy-written” stories, to wise and practical suggestions on how to engage with young children, this book offers an opportunity to create an occasional alternative to technology and to embrace a magical and special communication between children and adults.

Barbara Smith has extensive experience in special education, elementary school teaching, and administration. As Supervisor of Special Education at a local school district, and later as a school principal, she became an influential supporter of the integration movement. She created a company called Focus Conferences, which specialized in conference/event planning and educational consulting.

All through her career, Barbara has observed the importance of “magic” in the lives of children, and once she became a grandparent, found no greater joy than sharing it with her grandchildren.